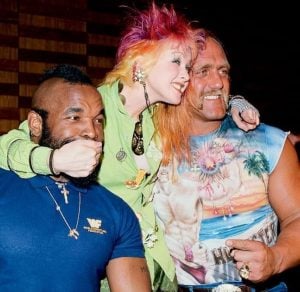 Pretty much EVERY teen movie soundtrack of the mid-to-late 1980s included a Cyndi Lauper tune or two, as essentially she singlehandedly punched the air for girl power.

A long time before the Spice Girls and Katy Perry loosely translated the ethos for a new generation. And let’s not forget, she dressed like nobody else. 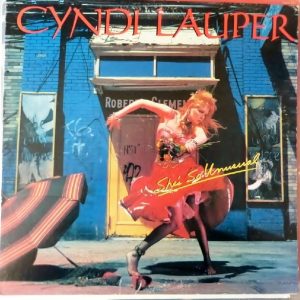 Think a cross between your nan, Boy George (in his ‘80s heyday) and Bjork; having gatecrashed a charity shop’s clothing department. In the dark. And then having raided your mum’s make-up box. All in a fantastic 1980s way, naturally. But what else can we claim to know about Cynthia Ann Stephanie Lauper, aside from her being a celebrated singer, songwriter, actress and LGBT rights activist with a career spanning some four decades? 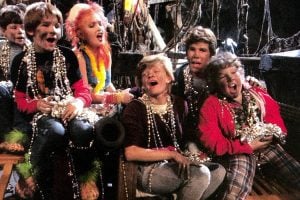 10. She’s a Record Breaker. But Not in a Roy Castle/Norris McWhirter Way

Cyndi’s musical achievements are more or less carved in stone, thanks to her debut album smashing a few records not long after its release in 1983.

And which culminated in her collecting the ‘Best New Artist’ award at the 27th Grammy Awards in 1985. 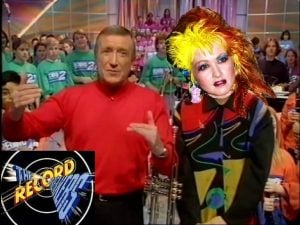 Chief amongst Lauper’s staggering achievements with the ‘She’s So Unusual’ LP, was the fact that it went on to spawn four Top 5 singles appearing in the Billboard Hot 100; making her the first female recording artist to ever do this. Said four breakthrough singles included, Girls Just Want to Have Fun, Time After Time, She Bop and All Through the Night.

9. She Lent her Vocals to One of the Best 80s Movies Ever!

Yeah, back in 1986 Lauper’s popularity was such that the producers of The Goonies approached her to lay down a signature track for the movie.

That track was ‘The Goonies ‘R’ Good Enough’.

While admittedly never the sort of record which would trouble the Ivor Novello Awards, that said it afforded Cyndi a huge amount of exposure for her (then) current album, ‘True Colours’. What’s more, she even got a cameo role in ‘The Goonies’ (playing herself in a music video the gang were watching).

Lauper listened to what can only be described as a varied fusion of music as a youngster growing up in the Queens neighbourhood in New York, and which included The Beatles, Ella Fitzgerald, Judy Garland and Billie Holiday. 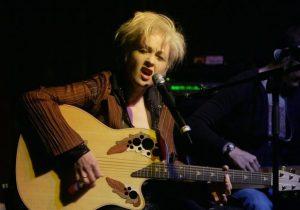 Still, from this heady mix of musical styles came the inspiration for Cyndi to start penning her own would-be hits of the future, and at the age of 12 she was bought a guitar as a present by her sister.

7. She Might Not Be a Girl Any More, But That Doesn’t Mean Cyndi’s Mum Doesn’t Wanna Have Fun…

Truth be told, Catrine Lauper features in more than just the one music video starring her famous daughter, having recurrently popped up in a few during the early years. However it’s arguably the ‘mom’ character observed in the opening scenes of the ‘Girls Just Wanna Have Fun’ video which gave Cyndi’s mum her MTV break as such. 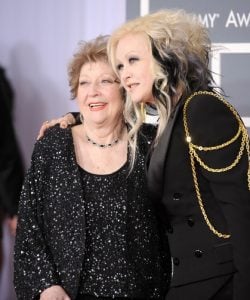 Catrine always considered herself her daughter’s number one fan, so you can just imagine how excited she would have been to get offered the chance to portray, er, her mom in said video.

I’m not entirely sure it would require attending acting classes, but joking apart; there’s not many parents who can say they appeared in their kid’s pop videos.

It very nearly never happened for Lauper in terms of her fledgling solo career, as in 1977 she was diagnosed with having damaged her vocal chords performing. The upshot being that her doctor advised her to take a year off from singing. 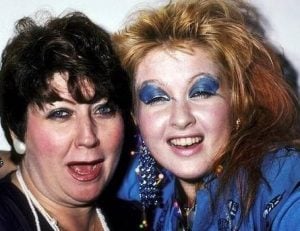 Informed she might never sing again if she risked defying their advice, Cyndi employed the help of a dedicated vocal coach thereafter, going by the name of Katie Agresta. With her help Lauper regained her voice and continued her path to the top.

5. Lauper Always Took The Rough With the Smooth

Tragically Cyndi’s uncle passed during Hurricane Sandy, the superstorm which wreaked havoc in America back in October 2012. 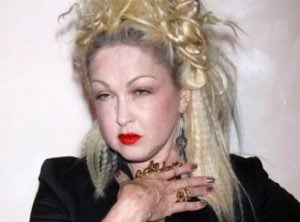 George Stathis, aged 90 was discovered in his home in Queens a few days after the devastating storm moved away, with Cyndi telling the New York Post; “I lost my Uncle George in the hurricane.”

4. Making an Appropriate Song and Dance About Those Often on the Fringes of Society

A long-standing champion of gay rights, Lauper put her money where her mouth was and founded her True Colours Fund (now renamed True Colours United) with the hope of inspiring everyone to raise the awareness of the plight of those who have been ostracised for their sexual preferences and fundamental beliefs. 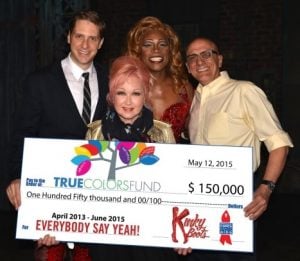 The philanthropist particularly wanted straight people to become active participants and rally against the system, so as to help advance the cause of the global gay, lesbian, bisexual and transgender equality-seeking community.

The end game being to bring about an end to the homelessness aspect which haunts this demographic in America.

Although Cyndi Lauper’s books have a lot less to do with schools of wizardry as opposed to schools of thought. Or to be factually accurate, reflections on her own past and upbringing. 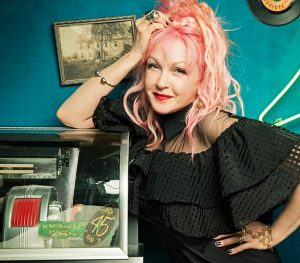 The best-selling author (in statistical recognition of her 2012 release, entitled ‘Cyndi Lauper: A Memoir’), even made it into the NY Times best-seller list shortly after its public launch in bookshops, which moved Lauper to tweet at the time (September the 12th that year); “Not going to believe this but the memoir is #25 on the NY Times best seller list. I hope my story inspires other women to tell their story.”

Always something to be justifiably proud of in this day and age, Cyndi Lauper obviously didn’t impress POTUS; otherwise he wouldn’t have dispatched her from the ninth season of America’s Celebrity Apprentice. You go gurl! #girlpower 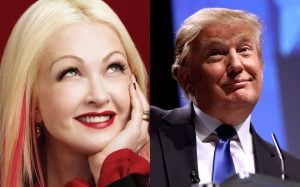 An ambivalent Lauper was fired from the show for being part of the losing team in the decorating challenge. Apparently her team leader put Cyndi in charge of the celebrity room but they had a difference of opinion over colour. Typically (some might say), Lauper envisaged vibrant and fun tones, however her team leader disagreed; and ultimately Cyndi paid the price.

1. Now That’s What I Call Cyndimas!

Yes, little did I/we previously know that Lauper had made her very own Christmas album. Affectionately titled, Merry Christmas…Have a Nice Life, the November 1988 release comprised a selection of both original material and covers of other yuletide favourites. If only I’d known?! 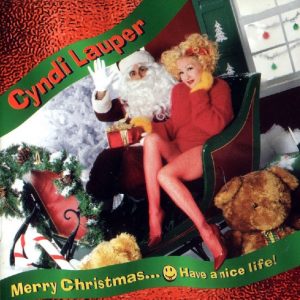 Oh, and if you though that (ever so slightly cynical) title was up there with the very best, wait to you learn the name of Lauper’s greatest hits album; Twelve Deadly Cyns…and Then Some. Peerless, in every respect.