Any kid with a rabid fascination with cars, trucks, good ole country boys, girls and outwitting the local sheriff’s department at the tail end of the 1970’s and early 1980’s, just couldn’t get enough of ‘Smokey and the Bandit’ when it crashed onto the silver screen around this time in our collective youth.

And right there, in the thick of the action, was this hirsute bloke you immediately knew you wanted to be when you finally grew up. 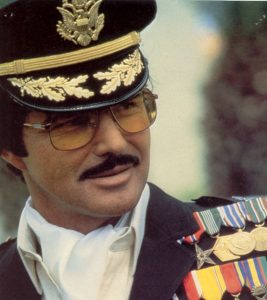 He was, of course, the late, great Burt Reynolds. A man/lead character who singlehandedly thrust the ‘tache back into the public conscience (along with the slightly less appealing chest hair) for a period back then, and heroically kept it there for a good while longer. The ‘Bandit’ of the eponymous movie title, was everything a boy wanted to be, and pretty much everything his parents didn’t want him to aspire to. 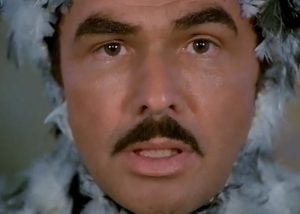 A bit like Burt Reynold’s other most famous character from the 1980s, ‘The Cannonball Run II’s’ irrepressible (but equally irresistible) racer J.J. McLure. Debonair, duplicitous and ever so slightly detached, Reynold’s other hugely memorable portrayal proved another instant hit to his legion of fans worldwide.

Yet he had to wait for a further 13 years before his stock rose that high again, when a more mature performance from Reynold in 1997’s ‘Boogie Nights’ won him rave reviews from film critics and cinema-goers alike. 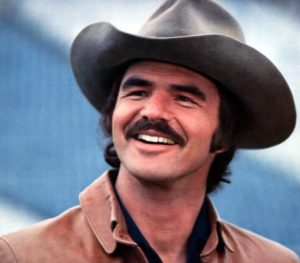 Away from the facial/bodily hair, ladies’ man charm, penchant for cracking one liners and general screen presence, there was a lot more to Reynolds, and below we take a look at just 10 things you might not have otherwise known about the Hollywood great who sadly passed away in September this year.

Let’s make no bones about it, back in the late 1970s and early 1980s Burt Reynold was the biggest of box office draws. In fact, between 1973 and 1984, Reynolds was acknowledged as one of Quigley’s ‘Top 10 Money Makers’ in their annual shakedown. 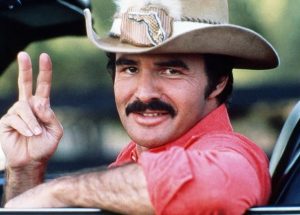 Whilst from 1978 to 1982 Burt notched the top spot for consecutive years. Becoming the first actor to achieve this remarkable feat over a span of five years since Bing Crosby in the 1940s.

9. The Rise and Fall and Rise Again of Burt…

It was often a case of boom or bust for Reynolds in terms of his star status in Hollywood, and he experienced lean years from the late 80s to the late 90s. Yet in 1997 he bounced back in memorable style, and yet in the most improbable of guises, when he (finally) agreed to a role in the pornography industry-focussed, ‘Boogie Nights’. 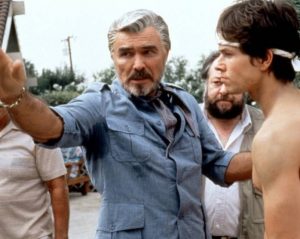 8. The Ones That Got Away

For all his hits (and movie misses), Reynolds often lamented on those that simply got away during the height of his Hollywood career. And these made a seeming roll call of some of the biggest films in history when considering the title found beneath. 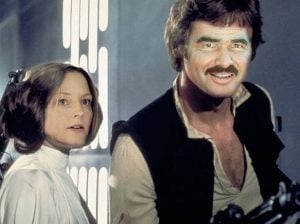 We’re talking about the likes of Han Solo in ‘Star Wars’, R.P McMurphy in ‘One Flew Over The Cuckoo’s Nest’, Edward Lewis in ‘Pretty Woman’ and even John McClane in a certain ‘Die Hard’ franchise. Although Burt had no qualms about turning that particular role down, adding (in typical blunt Burt fashion); “I don’t regret turning down anything Bruce Willis did.”

There was however one movie role which Reynolds still regretted taking a rain check on, even when reminiscing in the latter years of his life. And that was the part of 007. It may be hard to imagine Burt cast in the place of Sean Connery (although not to a mahoosive Reynolds fan like myself), however back in 1969 he was approached by the legendary James Bond producer, Cubby Broccoli to bring Ian Fleming’s character from the novels to the silver screen. 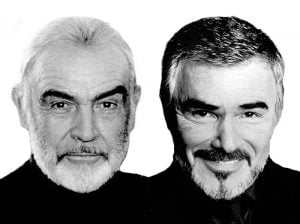 In his defence, Burt recalls precisely what he told Broccoli when he was courted, saying; “In my infinite wisdom, I said to [producer] Cubby Broccoli, ‘An American can’t play James Bond. It just can’t be done.” And despite countless efforts by a persistent Broccoli who tried to convince Burt otherwise, that was literally that. Only for Reynolds to conclude; “Every night, I wake up in a cold sweat.”

6. Burt (Clearly) Needed Time to Weigh Up the Pros and Cons of Roles

Reynolds wasn’t easily swayed to do what he didn’t want to, as other directors and producers also discovered. Like for example Paul Thomas Anderson, the man behind ‘Boogie Nights’ who we mentioned earlier. He steadfastly went at Burt like a dog with a bone, and repeatedly until such time as the latter finally succumbed to the director’s advances at the 7th time of asking/begging. 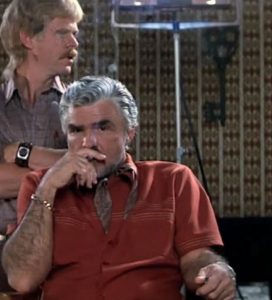 The reason why he didn’t want to sign up to the project was later revealed by the Oscar-nominated Reynolds as being due to his initial aversion to the subject matter (adult movie industry). Yet at the 8th time of asking, Anderson got what he came for; but not before histrionics from Burt. Apparently on that final occasion the director turned up at Reynolds’ hotel room, and as a result Burt went a little ‘berserk’ as he himself described events. Once the actor had had his meltdown, Anderson simply said to him (prophetically); “If you can do that in the movie, you’ll get nominated for an Academy Award.”

5. He Fancied Himself as the Next Peter Stringfellow, Rather Than Hugh Hefner

Reynolds opened ‘Burt’s Place’ in the late 1970s, a nightclub situated at the Omni International Hotel in downtown Atlanta. With regards to what made the venue special – aside from it being owned by Hollywood legend Burt Reynolds that is – was its unique – and not at all narcissistic – stained glass dance floor. 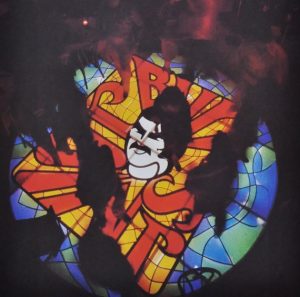 And what/who was illustratively depicted on said dance floor? Yup, Burt’s face, along with the words ‘Burt’s Joint’, weirdly. Unfortunately business wasn’t as brisk as Reynolds might have hoped, and just 12 months later it was wound up. A little bit of trivia for you, mind. The building also housed ‘The World of Sid and Marty Krofft’, a sort of indoor theme park; which later went on to become news channel, CNN’s HQ.

4. Music to Our Ears

Not content with turning down James Bond and dabbling in a nightclub which projected his own face across the dancefloor, Burt also wanted to leave his indelible mark on the world of popular music.

Or, American country music, at least. So in 1973 Reynolds released his debut (and to the best of our knowledge, only) long player, entitled ‘Ask Me What I Am?’ A relevant question, on account of his multi-tasking around this time. 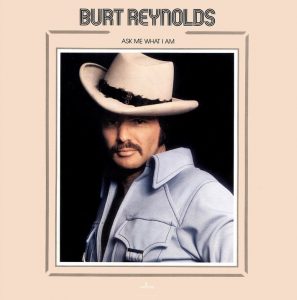 A definite bonus for fans of Burt’s crooning was the LP came with a free double-sided poster of the man himself; appropriately donned in what appears to be a blue jumpsuit and a Stetson.

3. Covered in Glory or a Step Too Far?

So, (and at various junctures in his career) Burt box-ticked actor, singer, nightclub proprietor and turner-downer of some great films. But there was still something missing from his CV. Or resume, as Americans refer to it as. And that glaring omission was of course, nude magazine cover/spread. So in 1972 Reynolds posed in the nude for an issue of Cosmopolitan magazine. 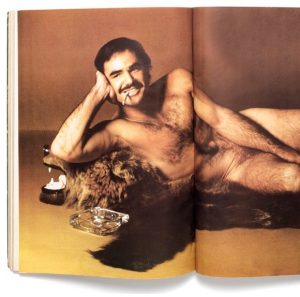 Not that Burt remembers the whole episode with fondness. On the contrary, as he spoke latterly of his embarassment over it and talks with a sense of lingering regret on his decision. Reading between the lines the full story is more one of timing, as the issue was published shortly before his film, ‘Deliverance’ was about to hit the cinemas. And despite selling out (some 1.6 million copies flying off newsagent’s shelves), Reynolds remained adamant that its presence may have distracted from the critical reception of ‘Deliverance’. And moreover, cost some actors an Academy Award.

Despite turning down the role of Han Solo in ‘Star Wars’, Burt Reynolds (albeit momentarily) had the last laugh, when on the opening weekend of cinema release in the US, ‘Smokey and the Bandit’ came out on top in the box office battle to end all battles. When all the receipts were tallied up on May 30th 1977, Smokey usurped Star Wars by some $1,728,060 to $1,554,475 respectively. 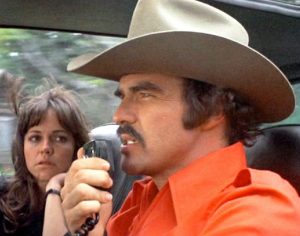 And it stayed this way for 1 week only, as then ‘Star Wars’ went on to achieve celluloid history in the years and decades to come, while Smokey remained ‘that other film released in 1977’. It didn’t, naturally, as the two movies are beyond compare, and opening weekend aside, are never judged in the same categories.

1. Did Someone Call for an Ambulance/Stuntman?

Yes, Burt Reynolds did just that in 1984 when he opted for an emergency vehicle to circumnavigate the coast to coast route across the US of A in the fastest time possible by road. Which was the whole premise of the blockbuster film, ‘The Cannonball Run II’, and not just a flight of fancy by Reynolds to clarify. 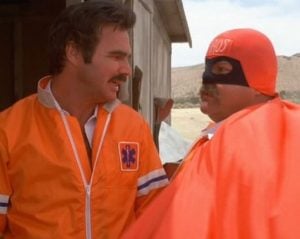 A film which saw Burt trouser a cool $5 million for his acting efforts, yet a role he also agreed to because it meant reuniting with his mate, and former stunt double, Hal Needham.

He’d been at Reynolds’ side (for the action sequences) during both Smokey films and the action-packed, ‘Stroker Ace’. A racing man through and through, it transpires that Needham also drove the distinctive orange Dodge Tradesman ambulance across the country in the real Cannonball race, which inspired the cinematic version of events’ and undertook prior to filming Cannonball II.