10 Things You Didn’t Know About ALF

Forgive me, but I was sorely tempted to run with the ’10 Photos TV Alien, ALF Didn’t Want You to See’ theme instead, not least due to the sheer volume of contentious material I managed to source online. Yeah, you wouldn’t believe it. Truly shocking headlines like ‘TV’s Loveable Alien, ALF Captured Stumbling Out of The Viper Room with ET, Chewbacca, Johnny 5 AND Charlie Sheen at 3am’ for example.

And ‘TV’s Loveable Alien ALF Caught on CCTV Brawling in the Street with Rainbow’s Bungle’ was another. As Jimmy Cricket would say though, there’s more. 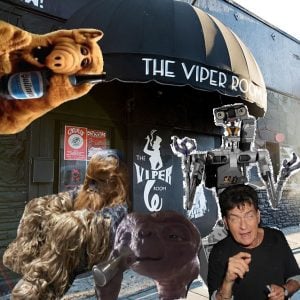 ALF was a bit of a rum one though, so it wouldn’t take a great leap of faith to imagine him getting up to the abovementioned tricks. 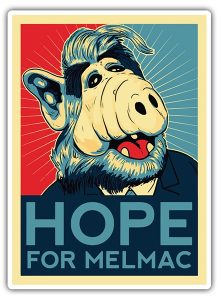 For those not on first name terms with ALF, let me quickly explain who/what he was. ALF was the brainchild of creator, operator and voice actor, Paul Fusco; and in his/its televisual incarnation took the guise of a sitcom about an alien from the planet Melmac, who crashes into the garage of the suburbanite Tanner family.

First aired on the NBC channel on September 22nd, 1986, ALF (an acronym of ‘Alien Life Form’) ran for four seasons between then and 1990, and followed the everyday life and times of ALF as he ingratiated himself into the 80s American lifestyle. 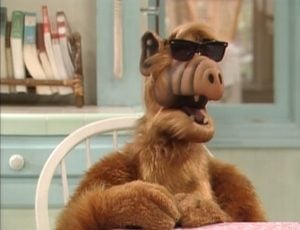 All this despite being initially met with disapproval from NBC chiefs who gave the original pitch a bit of a pounding. Not least when one critic described the presence of ALF himself as “a Teddy Ruxpin bear that looks like he was horribly disfigured by a revolving door.” Which as a critique I, personally, still find very amusing to this day. 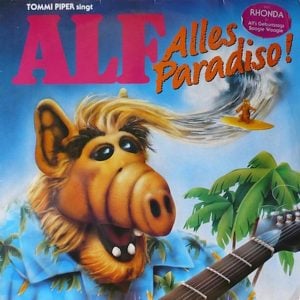 10. He Released his Own Pop Album (albeit only available in Germany)

For some largely inexplicable reason, ALF gained a massive (some might say, cult) following in Germany of all places. So much so that the hit show was later translated into German mother tongue, with a bloke called Tommi Piper voicing the cat-hating alien. On the back of the show’s surprising popularity, Piper recorded two albums and had four hit singles as the German ALF. Those German pop-pickers have always had great taste in music though.

*cue the sound of paper shuffling*

I meant to say Beethoven, Bach, Brahms, Handel, Strauss, et al. So I guess you might say that it came as no great shakes to learn that a 2 foot 9 inch alien life form would command a sizeable audience of Teutonic music lovers. All desperate to hear ALF’s latest releases, one of which was entitled ‘ALF Wird Unser Bundeskanzler.’ Which allegedly means “ALF Will Be Our Chancellor.” Those crazy German, eh….

9. He Was a Fast Food Rocker

Closer to ALF’s home (adopted US one that is, not Melmac), his musical stock was also dramatically rising.

And in recognition of this, in 1988 fast food chain, ‘Burger King’ released ALF records free with its kids meals. 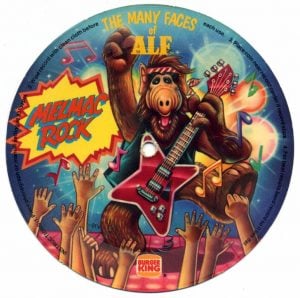 Manifesting in the form of four cardboard record singles and a collection of puppets featuring ALF’s likeness, the musical giveaways included the tracks, ‘Melmac Rock, Melmac Girls, Cookin’ with ALF’ and the catchily-titled, ‘Take Me, ALF, to the Ballgame.’ Suffice to say ALF did actually lend his ‘vocals’ to these records, and NOT his German namesake.

Mostly because only a very small demographic of American youngsters could speak German, I would have thought.

Continuing on a music theme (while also making the distinction between ALF the alien life form and Alison Moyet from ‘Yazoo’s’ side project, which shared the very same moniker), did you know that every single episode of ALF took its title from a pop song? With the notable exceptions to this rule being a few outliers, like the pilot and the ALF Christmas Special. 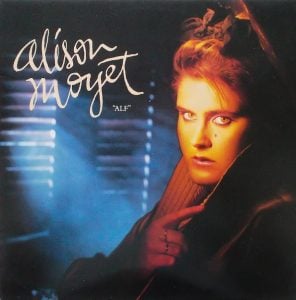 Which meant that nearly all 102 shows broadcast referenced famous pop songs. And with particular eras in question being pretty much anywhere from the 1960s through to the late 80s themselves, eagle-eyed title devotees were treated to the likes of Led Zepplin’s ‘Stairway to Heaven’, the Beatles ‘When I’m Sixty-Four’ and Duran Duran’s 80s classic, ‘Hungry Like the Wolf’ amongst others.

7. He Was a Recovering ALF-oholic

Yeah, there’s no way to dress this up; ALF was partial to alcohol. Bummer, right kids? C’mon though. Have you never allowed your dog to taste alcohol on a summer’s day in the pub beer garden? No, me neither, just for the record; as it’s irresponsible. However those who have may have witnessed their dog subsequently being a bit daft. So imagine what would happen if an alien life form acquired a liking for beery hops? 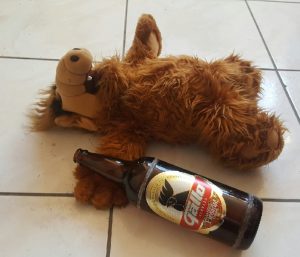 But worse than that. What sort of advert would this be sending out to said alien’s child-friendly Saturday tea-time audience at home?! Of course, you might first cut him a bit of slack, as after all he is 285 years old and from another planet. So he’s entitled/earned the right to relax once in a while. Thankfully – for TV ratings and concerned parents – the fuzzy puppet adored by children stopped slugging bottles of beer after the first season, with NBC convincing the writers to eliminate the alcohol consumption.

Speaking of the adverse effects ALF may have had on kids, it wasn’t just his eyebrow-raising drinking habits which needed to be curtailed. If you remember he famously enjoyed the taste of cats, and often spoke of his feline-inspired culinary expertise early on in the series’. Again, this was largely frowned upon by producers and parents alike, as setting a bad example to impressionable children. Especially those who had pet cats at home which often used to wander past them looking incredibly tasty. 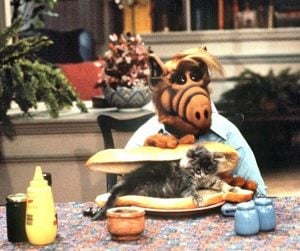 But it wasn’t just this feline variation on ‘meals on wheels’ which was worrying folk, as in the episode ‘Try to Remember’, ALF hilariously creates a jacuzzi in the bathtub with an electric mixer from the kitchen. Unfortunately a child attempted to recreate this very scenario and almost killed themselves due to electric shock; hence the scene was hastily re-shot/edited with a manual egg beater, as witnessed in re-runs.

Or something similar sounding. Yes, back in the late 1980s ALF had sports trading cards (which were still all the rage in playgrounds back then) dedicated to him. And assorted stars of Melmac’s most popular spectator and participant sport, Bouillabaisseball. 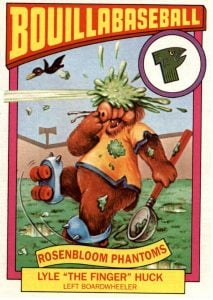 Melmac denizens apparently couldn’t get enough of Bouillabaisseball (which was in its purest form, simply baseball with a fish), and to celebrate this US trading cards giant, Topps published a series of cards which depicted some of the sport’s movers and shakers. What’s more, the iconic Marvel Comics published a fifty-issue run of ALF comics in the late 80s too. Which would have been a lot cooler.

4. Brace Yourself Kids/Kidults, There’s Often Talk of ALF: The Movie in the Hollywood Pipeline

Every few years the rumour mill goes into overdrive again, with various sources suggesting that so-and-so (so-and-so usually being a film studio, not a random neighbour your mum talks about) is developing an ALF movie for the big screen. The latest name associated with such gossip-mongering is none other than Sony Animation. 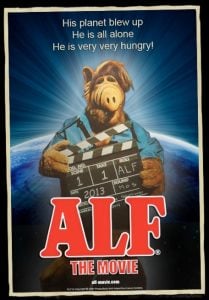 But then this most recent – and far from surreptitious – claim isn’t entirely baseless when learning that in 2012 Sony Animation purchased the film rights to the intellectual property. And Sony’s studio were instrumental in the development of a CGI/live-action hybrid movie with the producer of ‘The Smurfs’. So, watch this space as they say….

ALF had a doppleganger. Well, sort of. Did you ever notice how ALF sometimes looked, how can we put this, different? I mean, still very much ALF-like (with or without a beer and a moggy sandwich), but still not quite right. Well, there’s a very good reason for that which I’ll explain after the drop. 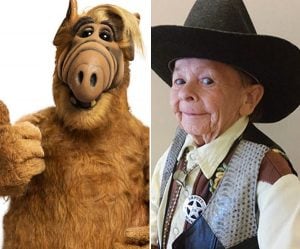 There were two ALF puppets. One of which was employed for all the shots which took in the stomach upwards (all 8 of them!), while the other variation on a theme was facilitated solely for full body shots. And the same one which routinely saw the late 2 foot 9 inch human actor, Hungarian actor, circus performer, entertainer and stuntman, Michu Meszaros puppeting from INSIDE the costume. Meanwhile a rehearsal puppet – called RALF (Rehearsal Alien Life Form) – was also in existence, so as to avoid excessive wear and tear on the real ALF puppets.

2. ALF Was Coming In Your Ears Like Chorley FM!

Yeah, ALF didn’t just look the part in the late 1980s, but sounded it too. And that was courtesy of the programme holding the honour of being the very first television show to be presented in Dolby Surround Sound, anywhere in the world. 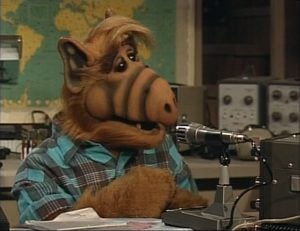 Essentially ALF served as the test bed for the release of Dolby Surround sound into the mainstream TV market, because prior to 1986 all American programme-making was either broadcast in mono sound or simple 2 channel stereo sound. So, if you owned a decent speaker system at the time you could hook it up to your telly and sit back and enjoy ALF’s sarcasm at the expense of his US audience, in all of its full sub-woofer-supported glory.

Sadly ALF wasn’t as bigger a hit with the other actors on the series as he was on the other side of the TV. According to those closely involved with the making of the show, the set was a hotbed of tension and strife, where apparently cast members did little to disguise their contempt at having to play second fiddle to an inanimate puppet; and accommodating the technical demands such programme-making required. 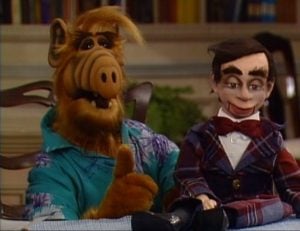 Bit like Rod Hull in some ways, when he complained on Michael Parkinson’s chat show many years later that filming scenes with Emu was something akin to being a double-edged sword. In as much as he (Emu) was ultimately the star of the ‘Rod Hull and Emu Show’ and ‘The Pink Windmill’. And of course, actor Bob Hoskins almost lost the plot entirely if you recall, when filming the ‘green room’ scenes for ‘Who Framed Roger Rabbit?’