10 Photos The Rock Doesn’t Want You To See

If I said ‘The Rock’ to my parents, odds on they’d immediately think I was referring to Gibraltar. Conversely, if I started banging on about ‘The Rock’ to a potential partner who had a reputation for gold-digging, the chances are they’d believe I was referring to a bling-tastical engagement ring. Yet the merest mention of ‘The Rock’ to your average WWE and/or action movie fan, and they’d give you an all-knowing look. And probably try to high five you or something equally embarrassing. 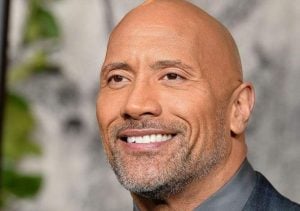 But that’s perfectly OK, because The Rock is The Rock. With or without the apostrophes henceforth. And he commands our respect. Like Hulk Hogan, but in a less shouty manner. At the end of the day it’s all about maintaining some sort of perspective, and where The Rock’s concerned, you need to be aware of perspective before you go any further. And to help you, there’s even a website which is dedicated to photos of The Rock making normal-sized things look small. Although that might be an optical illusion as you’ll discover a few revealing paragraphs in. 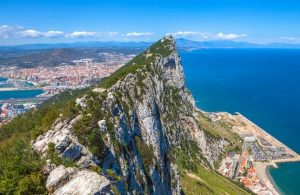 But then The Rock has a habit of making pretty much anything look tiny when captured in the same frame as him. A very wide-angled frame, I would imagine. Height, well, that’s another matter to ‘discuss’ in a while. But theoretically for now I’m talking skyscrapers, monster trucks and Donald Trump’s ego, so objects which aren’t exactly diminutive in their own right. Like Raymond before him, EVERYBODY loves The Rock. And everybody recognises The Rock. Or is it, the The Rock? I’ve never been entirely sure about his full title. Aside from Dwayne ‘The Rock’ Johnson. 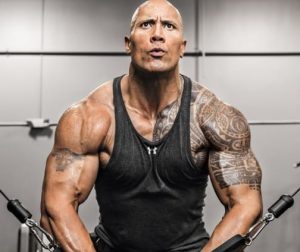 That’s largely – and I mean, largely – irrespective though, as hereabouts I’m drawing your attention to the existence of ‘10 Photos The Rock Doesn’t Want You To See’. And which would displeasure him immensely if you did. But although he’s not the sort of man-mountain you’d go out of your way to irk, what he can’t see won’t hurt him. The same can’t be said about us after feasting our eyes on this (not so) little lot, mind….

10. The Rock Was The First Known Case of Benjamin Button Syndrome

When he was just 16 years old, he looked like a 46-year old father of two who worked in real estate. As this high school photo from back in the day illustratively testifies. 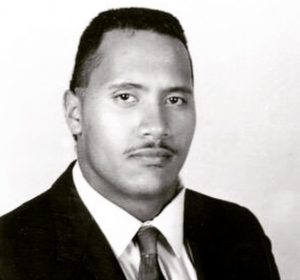 9. The Rock Hugs A Rock. The Planet Implodes

Either The Rock is a huge fan of ‘Twin Peaks’’ iconic ‘Log Lady’ character, or he didn’t receive the memo which told him that Kryptonite is actually luminous green. And a bit glowy. 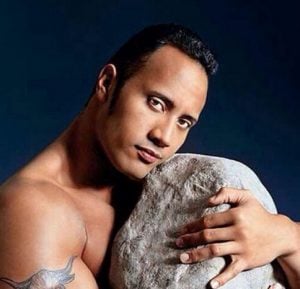 Or maybe he simply collects rocks and has so many that he decided to change his name accordingly so as to reflect his love of the inanimate objects founds throughout the world. Who really knows. The only thing we can be sure of is he should really have taken a leaf out of Athena’s ‘80s poster book; and borrowed an infant to cradle in his muscular arms. And opted for a monochrome filter. But other than that, spot on.

8. The Rock Has Cornered The Market in Social Media Pep Talks

Tell me, who doesn’t love an inspirational quote hey?! Well actually, I don’t. Up there with Croc-wearers, recruitment agencies and SUV drivers in my book, but hey, let’s stick to the script here. 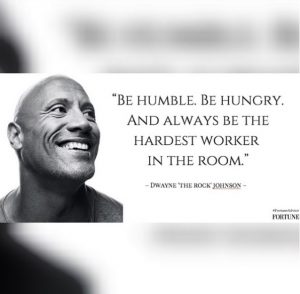 If anyone’s gonna motivate you in your unfulfilling life, then it’s a timely message from our mutual friend/cod philosopher-in-chief, The Rock. And remember kids. ALWAYS eat your greens.

Apparently he’s not afraid to make a fool of himself by wearing a novelty Christmas onesie on live TV. But he should be. And if he thinks the Nikes restore some sense of dignity, he’s wrong on that score too. 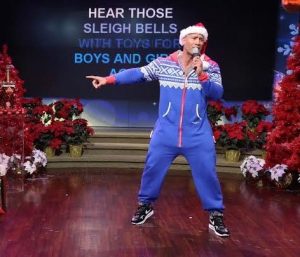 But as ever, I’m not qualified to pull The Rock up on this fashion faux pas. So we’ll let him have his seasonal moment and let him get it out of his system and never return to this subject, yeah yeah?

6. Hello. Is It Me You’re Looking For….Er, No. Not Dressed Like That, Mate

Seemingly channelling his inner rapper by displaying his heavy metal for all to see, The Rock had tragically failed to notice he was still wearing an architect’s turtleneck top beneath it, prior to posing for this 1996 capture. 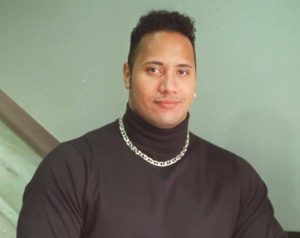 What you the (incredibly lucky) viewer can’t see, and which just lies out of shot here, is the item which completes ‘the look’. That item being what The Rock’s fellow Americans comically refer to as a ‘fanny bag’.

5. This Bull Gives Me Wings!

With a back catalogue of roles where he portrays all-action men involved in a whole spectrum of pulsating and adrenalin-fuelled pursuits, I can understand why perhaps The Rock chose to accept a part outside of his normal acting comfort zone. 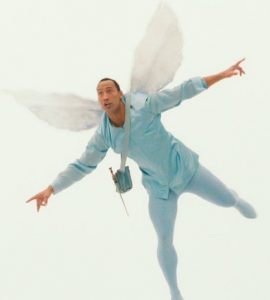 And speaking of ‘comfort’, the baby blue Gimp suit-of-sorts he wears playing a tooth fairy in the aptly-named 2010 movie, ‘The Tooth Fairy’, does look very accommodating. However you have to ask yourself this. At what point when reading through a script do you casually overlook the bit where it says you’ll be wearing fairy wings on your back for the most part, and subsequently sign on the dotted line?

No, not the Carphone Warehouse employee variety. Not unless they’ve been putting in some serious time in the gym that is. But rather The Rock getting in touch with his more intellectual side as seen here in this Instagram post. 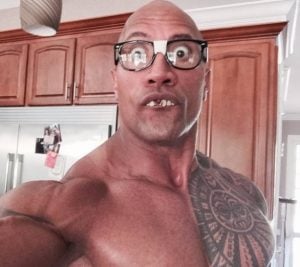 We’re still not entirely sure why ‘The Fast and Furious Star Who ISN’T Vin Diesel’ opted to don Clark Kent’s spectacles and borrow Shane MacGowan’s teeth, we just know that he did as we have photographic evidence to substantiate claims.

Now, we’re the first to admit, size isn’t necessarily important. And it’s what you do with what God gave you that really counts. But when you go round telling one and all that you’re 6 feet 5 inches only to sometime later find yourself stood between a (stooping) 7 feet of Shaquille O’Neal and a 6 foot 6 inch Charles Barkley, you have to have made sure you got your own maths right. Right? 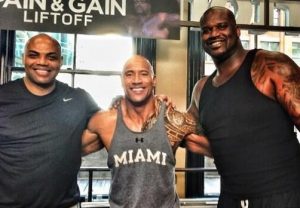 I guess it’s the smaller man’s equivalent of ‘creative accounting’. Throwing in some random digits and hoping nobody notices the discrepancies. The general rule of thumb being to distance yourself from anyone who might put your figures into the spotlight.

There are few people out there who could get away with passing themselves off as Miley Cyrus, apart from Miley Cyrus. And even she struggles with this sometimes. 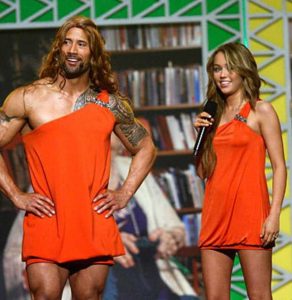 But when you’re 6 feet 6 inches (please see above) of pure bald beefcake, then it’s a big ask to put yourself in Miley’s heels. But not insurmountable, as you can see here. And then, never un-see, I’m afraid to break it to you….

This, believe it or not, is The Rock. Or rather, The Rock as interpreted through CGI for the ‘Scorpion King’ movie. I don’t really know where to begin with this, so maybe I’ll just leave this photo here and move on. 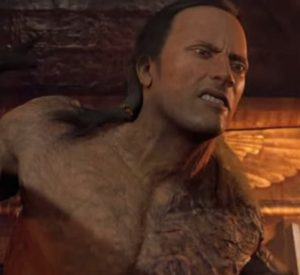 Preferably move on to a place a long, long away from this photo, and therein any device which can support Google Images. Something we suggest you do too. And before you’re fixed by ‘The Rock’s’ Medusa-like stare.