Few people party as hard or as often as P Diddy. Perhaps with the exception of Leonardo DiCaprio that is. And Mike Tyson, but that nearly always ends in tigers. And naturally, the more you party, the more opportunity there is that you’ll let your guard slip and embarrass yourself. The sort of embarrassment you wouldn’t wish to become public knowledge. Which is precisely where we come in, as we don’t share those concerns. 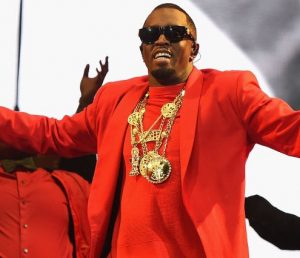 Thankfully P Diddy has a rich seam of embarassing photos from which to mine, as it appears he has a habit of finding himself in certain #awks situations. And unfortunately for him (but not so for us) at the exact juncture of peak awkwardness somebody captures the moment on film. Or on their smartphone anyway. Which then, mysteriously finds its way online via the power of witchcraft/relatively straightforward uploading. 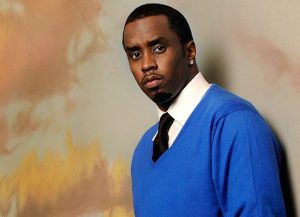 Capturing this hip-hop zeitgeist, the following 10 photos depict P Diddy in a way which he probably isn’t too keen on saving for posterity. And certainly wouldn’t want his parents dragging out from an album when inviting a new girlfriend round for tea and cake, let’s be honest. But we don’t care about that, as where there’s a photo, there’s a way. So dig in!

Remember in ‘Back to the Future’ when Marty McFly’s photo of his siblings suddenly starts fading, to the point that his sister almost become invisible?? (something to do with him changing the course of time, etc). Well, Diddy must have been inspired by this when he decided in his wisdom to ‘lose’ both Fabolous AND French Montana from a recent phot, in the wake of having beef with the latter of the fellow hip-hop producers. 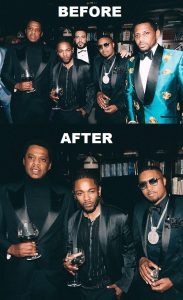 Not that this was the first time the Diddymeister has made people in his photos disappear as if my magic. Or as it’s more commonly referred to here in 2018, Photoshop. Just ask a host of other folk he’s cropped out of photos which previously featured them in. Like Kylie and Kendall Jenner (who mysteriously vanished from a photo of himself with Migos, Wiz Khalifa, and Syre).

Kardashians, Jenners…if you’re anything like me then you probably don’t know where one ends and the other starts. Clearly Diddy has similar identification issues, otherwise he wouldn’t have accidently confused Kendall Jenner for her sister, Kylie. Or was it vica versa?? 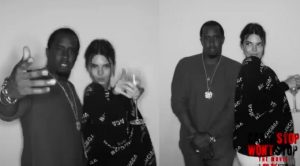 At the premiere of his own documentary, ‘Can’t Stop Won’t Stop: A Bad Boy Story’ (which chronicles Combs and his record label’s rise), the Did’s facilitated a special photo booth and posed with who he believed at the time was Kylie Jenner. And underlined this in the resultant Instagram upload which he subsequently posted to his followers.  Tragically he’d got Kylie mixed up with Kendall, the actual Jenner he had shared said booth with. Like, totes cringe.

The rapper is no stranger to making the headlines, as much due to his bad boy shennagins as his musical endeavours. Yet a headline Diddy would like to bury forever has to be that time he was arrested (and later bailed) for three counts of assault, while watching his son play football at UCLA Uni in LA. 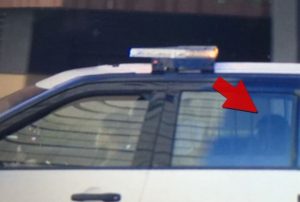 Declaring that he was acting in self-defence against the American football coach he allegedly assaulted, Diddy was finally released from an LA jail on bail; and at a figure set at $160,000. Ouch, that’s gotta hurt!

You might think that sometimes Diddy wishes a hole would open up in the ground and swallow him, to save him putting his foot in it again. Well, this is exactly what did happen at the 2015 BET Awards ceremony, when Mr Puffy Coombes (real name, something, something) disappeared into a chasm on stage whilst performing what onlookers described as ‘a medley’ of hits alongside Lil’ Kim, Mase, Faith Evans, 112 and the Lox. 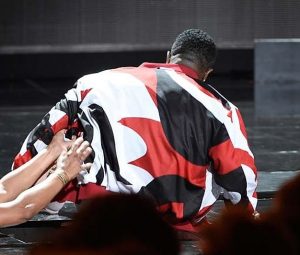 The hip hop star with a career spanning more than two decades sadly couldn’t bridge the unseen gap in the stage, from which co-singer Lil’ Kim had made her own grand entrance a few minutes earlier. Momentarily dropping out of sight, Diddy regained his composure and momentum to return to the stage shortly afterwards to continue the abovementioned medley to the delight of his fans.

6. And Sean Coombes (Thinks He) Wins By Four Names to Love

Not so much a photo, more of an action. You know how it is. You have this name in life you’re given by your parents whether you want/like it or not. You decide to change it for another. Then another, when you get bored of the new one. And then another, because you’re at a loose end one day and think, what the heck.

But then the name you choose is actually a widely-circulated word. One which is used to describe a myriad of innermost feelings, as well as being keenly associated with the world of tennis. 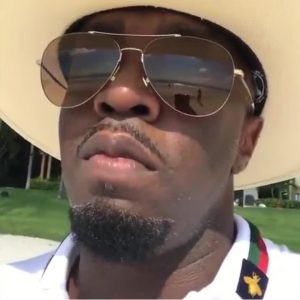 But none of that matters when your name is Sean ‘Puffy, P. Diddy, Puff Daddy’ Coombes, the hip hop mogul who recently exclaimed that he’d no longer be answering to any of his previous monikers, instead only responding to the title, ‘Love’ or ‘Brother Love’. Not to be confused with the colloquial term of endearment used by generations of northern barmaids.

Sometimes we all just want to take the weight off our feet, right. It’s been a long day, and you’ve been dreaming of this moment for the past few hours. The moment when you finally get to relax, sit down and recline on the red-carpeted steps at the Met Gala. Wait a minute, rewind. Yes, THAT. 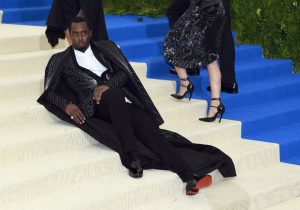 Clearly feeling a bit jaded after (not) sitting through the whole awards season prepping process, which habitually includes hours of pampering, wardrobe fittings, transporting from the hotel room to the venue and other dreary stuff, Diddy decides to take matters into his own hands. Or rather bum cheeks. And sets up camp on the red carpet. Which in the event actually appears to be cream.

4. Excuse Me, Have I Sean You Somewhere Before?

Of course, it’s not always you that gets a little mixed up with people, places, faces, etc. It’s others when they see you and swear it’s someone else who looks the spit of you. Well, according to them.

Cue the slightly awkward occasion when Diddy was mistaken for Kanye West at an art exhibition he was attending in Miami. 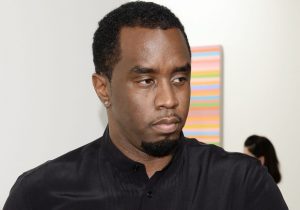 An onlooker told how Art dealer and collector, Jeffrey Deitch had bumped into Diddy at the booths, and initially believed he was Kanye. Even going as far as to greet him as West.

Almost immediately acknowledging the embarrassing situation, there was silence as people waited for Diddy’s response. Apparently he took it all in good stead and laughed. Well, that’s the official line. We’d imagine that Diddy was seething on the inside, despite his outer sunniness.

I was once captured in a photo sat in front of the cottage famous artist, Constable pictorially cemented in ‘The Hay Wain’. The interesting thing being that instead of giving it the ‘touristy smile’, I was staring at something in my hand at the key moment. But then said photo wasn’t going to be seen by millions of people across the globe. 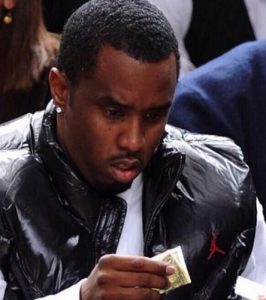 Unlike the photo of Diddy that did the rounds where he’s seen staring mysteriously – and inexplicably – at a $1 bill while sitting courtside at a Knicks game. Explaining just why he looked so mesmerised by the folding stuff some time later, the artist-formerly-known-as Puff Daddy told The New York Times Sunday Magazine; “I love a $1 bill! I just make weird faces sometimes.” Yeah, right. But a photo you don’t wanna keep seeing all the same, we’d wager.

Invited onto the primetime US chat show, hosted by Ellen DeGeneres to talk about his new range of Ciroc vodka drinks (and specifically the individual flavours), so far, so good. That is until the juncture when the flamboyant – and seemingly persuasive – leading lady suggests that he indulges in a drinking game for fun.

Shortly after (we assume, losing) the 5 second rule challenge, Diddy is seen ever so slightly worse for wear. Which while making for great/memorable TV for viewers, isn’t necessarily something Diddy wishes to be reminded of too often we would have thought.

We’ve all been there. That time when you bump into your ex with her new boyfriend. Yeah, the one who’s a lot younger than you. Admittedly, probably not richer, but definitely younger. Well, not even celebrities can avoid awkward situations like this from time to time. 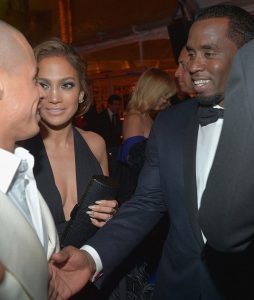 Diddy didn’t, that’s for sure when he was formerly introduced to ex, Jennifer Lopez’s toy-boy new flame, Casper Smart at one post-Golden Globe awards Hollywood gathering a few years back. In all fairness the Diddymeister coped admirably with the impromptu scene, not least because on his arm he had his (then) new romance, in the shape and form of singer, dancer, actress and model, Cassie Ventura.