10 Musical Toys All 80s Kids Wanted To Own

Whilst most of us may not be the next Elton John or Ed Sheeran, some of us will be able to hold a note, and others may even be able to play a musical instrument to a decent level.

Music teachers or lessons probably had a massive hand in the level of our musical skills, but inspiration often came before that in the form of the musical toys that we enjoyed playing with as young children. Below are 10 musical toys that we believe all 80s kids wanted to own, and the question we would like to ask is, how many do you remember? Be sure to share this post with your fellow 80s kids so that they too can take a musical, nostalgic trip down memory lane! 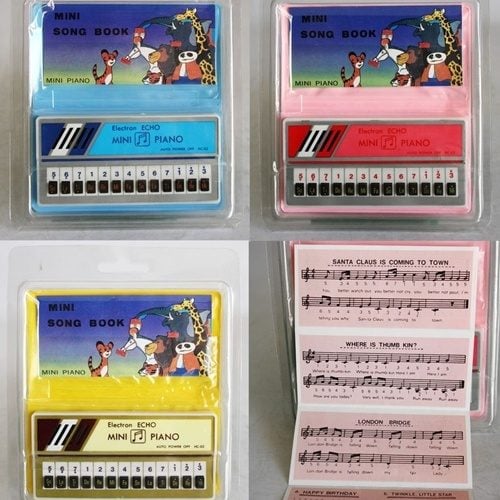 We’re sure that many of you will have fond memories of making music with the gorgeous teeny tiny Electron Mini Piano when you were a youngster.

Specifically designed for children (as adults could barely get the keyboard’s keys to work with their grown-up, stubby fingers!), the Mini Piano also came with a mini songbook to encourage us in our music-making. 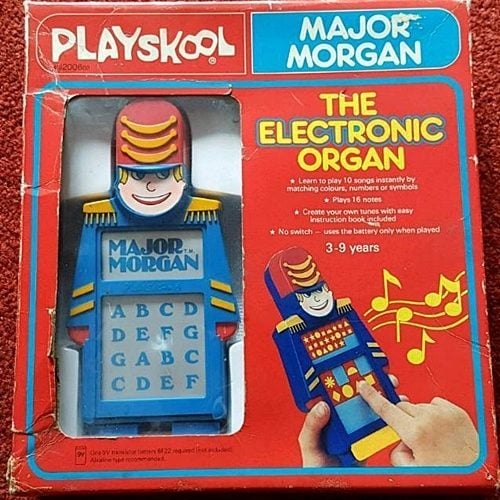 Advertised with a tag-line of ‘Let’s Make Music,’ Major Morgan wasn’t going to produce the next electronic chart hit, but it did provide the tools to enable us to replicate Nursery Rhymes and other simple songs.

First released all the way back in 1979, Major Morgan came with slide-in cards that allowed us to produce various musical masterpieces, and we remember it with much fondness! 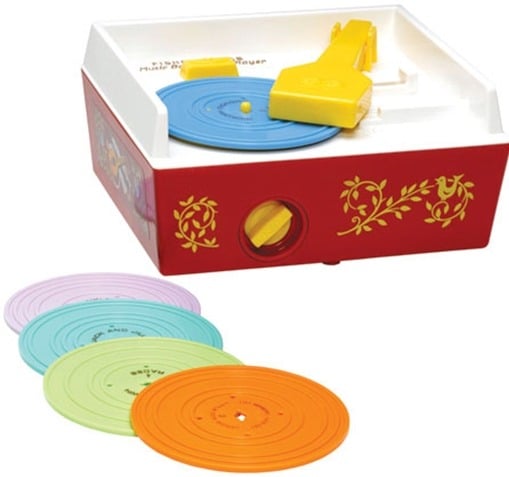 Back in the days when many of our parents had a real-life Vinyl Record Player, the plastic Fisher-Price toy version meant that we could be just like mummy and daddy.

Coming with a number of coloured records that played different songs and Nursery Rhymes, the Fisher-Price Portable Record Player was a great piece of kit that we remember using over and over again. 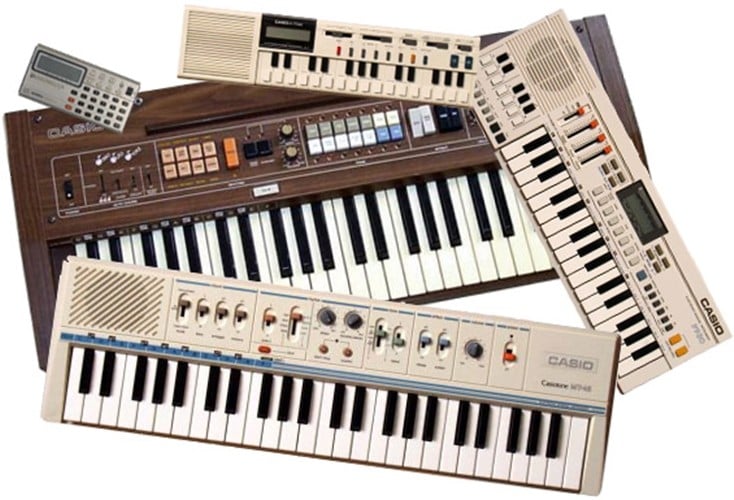 Casio Keyboards came in various shapes, sizes and forms back in the 1980s, and we have great memories of the one we owned.

Ours was small enough that it could be carried around the house, and it had lights above the keys that, if followed correctly, allowed us to replicate such songs as Spanish Eyes and the Star Wars Theme Tune! 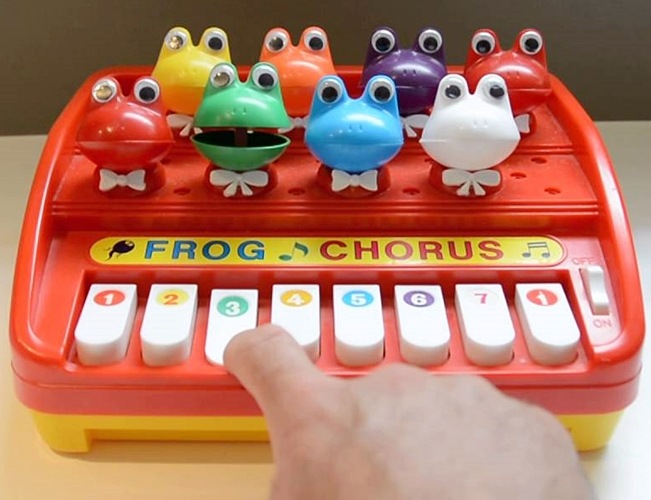 A delightful toy that gives us all kinds of nostalgic butterflies in our tummy, the Frog Chorus Piano was both cute and useful at the same time.

If you remember, as you pressed the keys, not only would the note sound, but the corresponding Frog’s mouth would pop open. It really was about as cute as a musical toy could get! 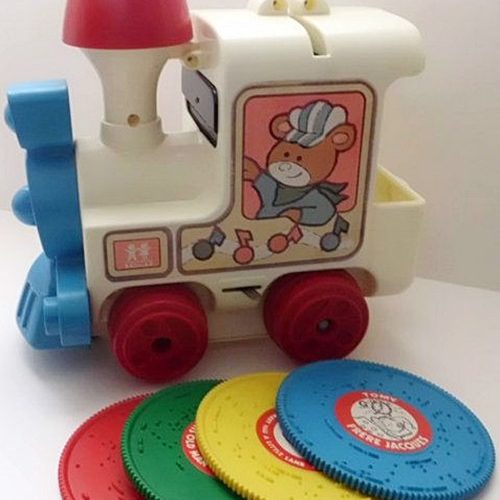 The Tuneyville Choo Choo Train was similar to the Fisher-Price Portable Record Player in that you inserted coloured plastic records to play songs and Nursery Rhymes.

The difference with the Tuneyville Choo Choo Train being that it would also move around your Living Room as it played records. 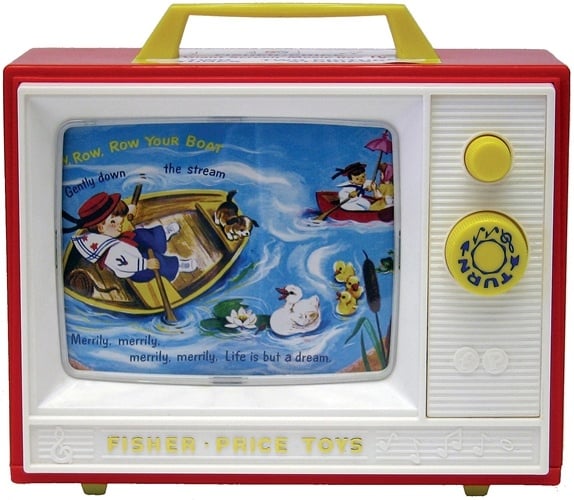 In the age of Mobile Phones, Tablets and Internet-connected Televisions, the Fisher-Price Musical Television might seem rather antiquated, but we believe that sometimes, simpler is far better!

You had to ‘tune’ the TV by turning the button to wind it up, and it would scroll through a line of lovely pictures whilst also playing ‘Row Row Your Boat’ and ‘London Bridge is Falling Down.’ 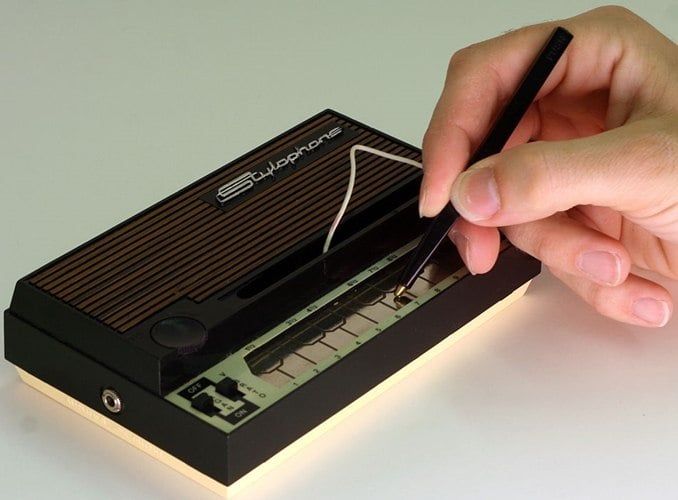 Who remembers owning a Stylophone? Whilst they didn’t exactly make you sound like Gary Numan, the lovely electronic noises they made were more than good enough for our childhood ears.

Rather than asking you to use your fingers like the Electron Mini Piano, Stylophones came with a small plastic pen that you could slide along the keys to produce some amazing sounds. 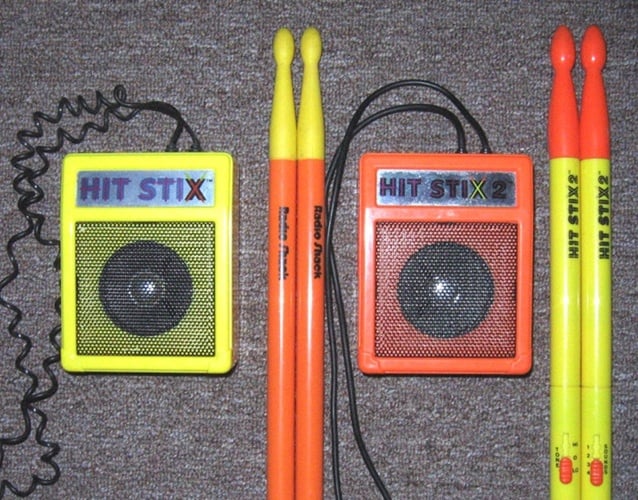 If you ever wanted a drum kit but could never persuade your parents to make the space in your house, then Hit Stix were the answer!

Hit Stix allowed you to play drums on… thin air! Using technology that we still don’t fully understand, they turned you into a budding drummer in no time whatsoever. 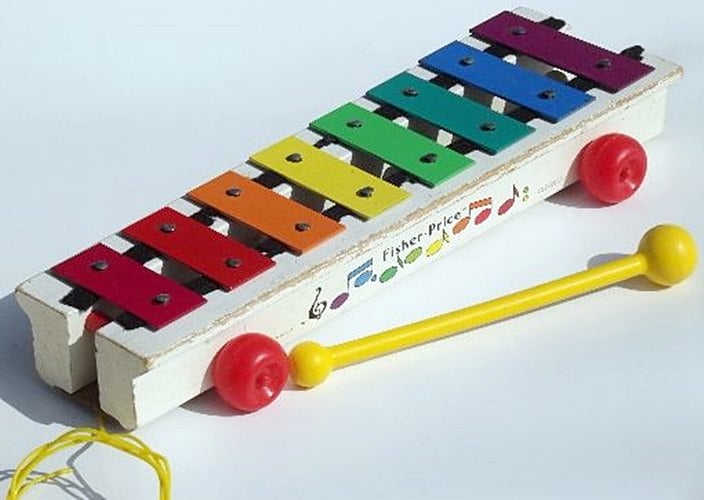 There were a variety of musical instruments available back in the 1980s, but the Fisher-Price Xylophone holds a very special place in our hearts.

Perhaps it was the coloured keys or the fact you could pull it along, but whatever the reason, we remember using it like it were yesterday.