Crush Your Enemies With These 10 Facts About Conan The Barbarian

Arnold Schwarzenegger became a superstar with The Terminator, but two years before that he got his first great leading role in epic fantasy adventure Conan the Barbarian. The first big screen treatment of writer Robert E. Howard’s pulp hero, the 1982 film cast the former bodybuilder as an orphaned slave who grows into a mighty warrior, and seeks vengeance for the murder of his parents. Here are some facts about this sword and sorcery classic which you might not have known.

10. Ridley Scott turned down the chance to direct before John Milius signed on 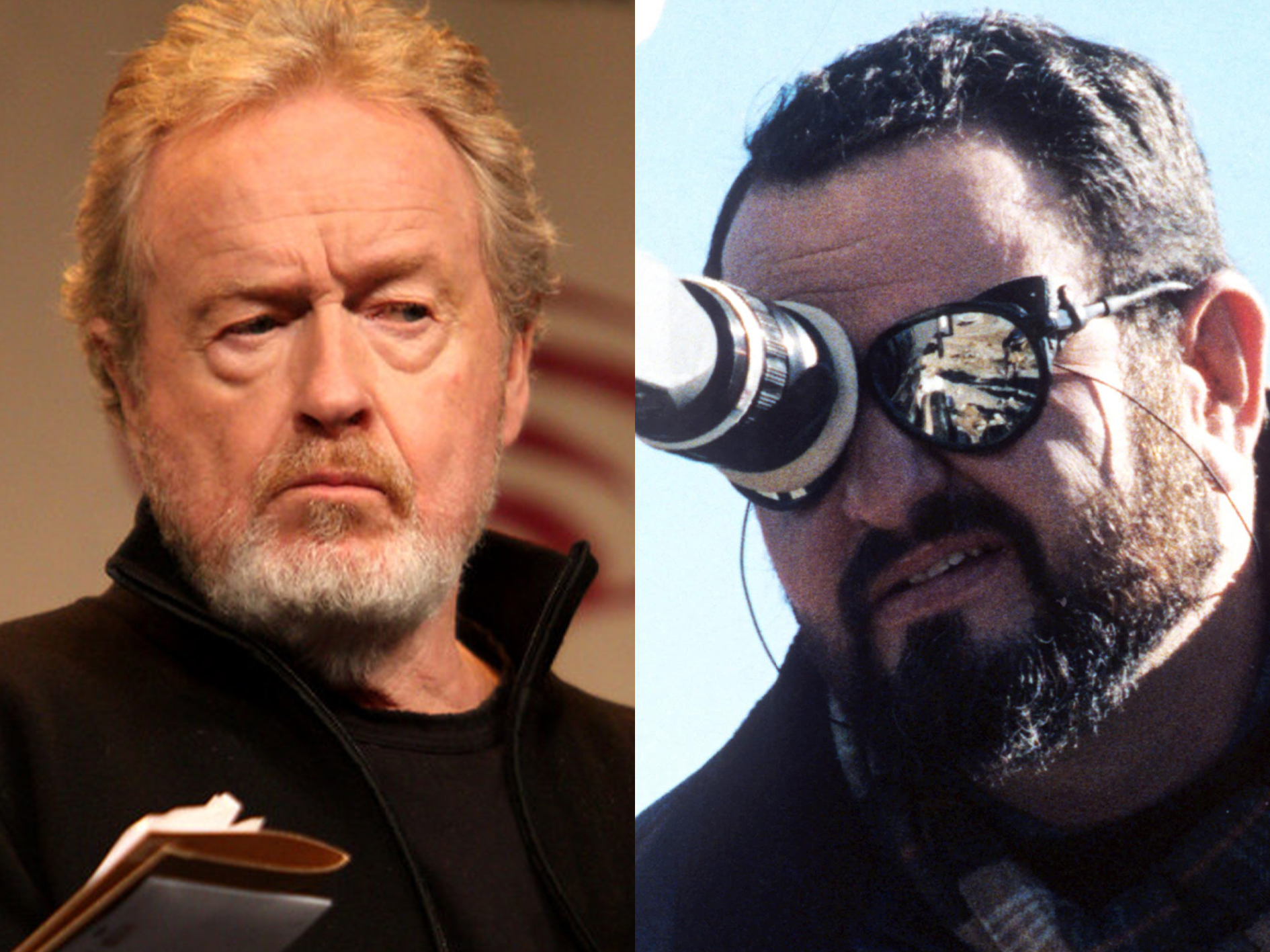 Before cameras rolled on Conan the Barbarian in October 1980, the film had spent around a decade in development. After the success of Star Wars, Hollywood’s taste for old-fashioned mythic adventures was rekindled, and the project was finally able to get off the ground. It was still a bumpy road though, as it took a while to settle on a director.

After writing the initial screenplay, Oliver Stone offered the film to Ridley Scott (who had just made Alien), but the director wasn’t interested. Eventually, the job was accepted by John Milius (best known for his screenwriting work on Apocalypse Now, Jaws and the Dirty Harry movies).

9. Arnold Schwarzenegger was the only choice for the title role 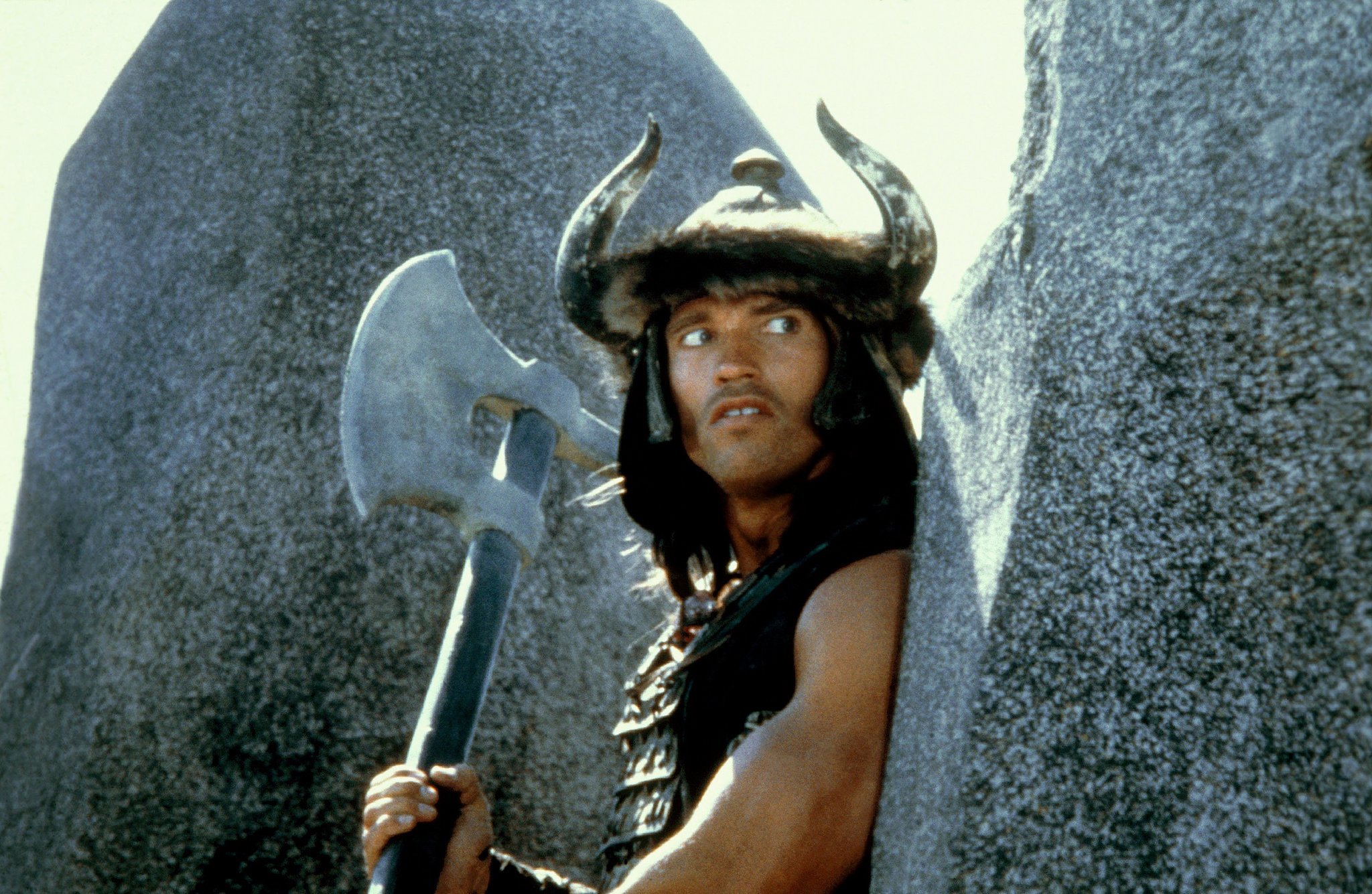 It may have taken a while to find the right director, but the producers knew early on who they wanted to play Conan himself. After seeing Arnold Schwarzenegger in bodybuilding documentary Pumping Iron in 1976, they knew he was a perfect match physically for the character.

Before settling on Schwarzenegger, the producers briefly contemplated approaching the better-known Sylvester Stallone and Charles Bronson, but ultimately never reached out to either actor.

8. Oliver Stone’s original script was set in a post-apocalyptic future 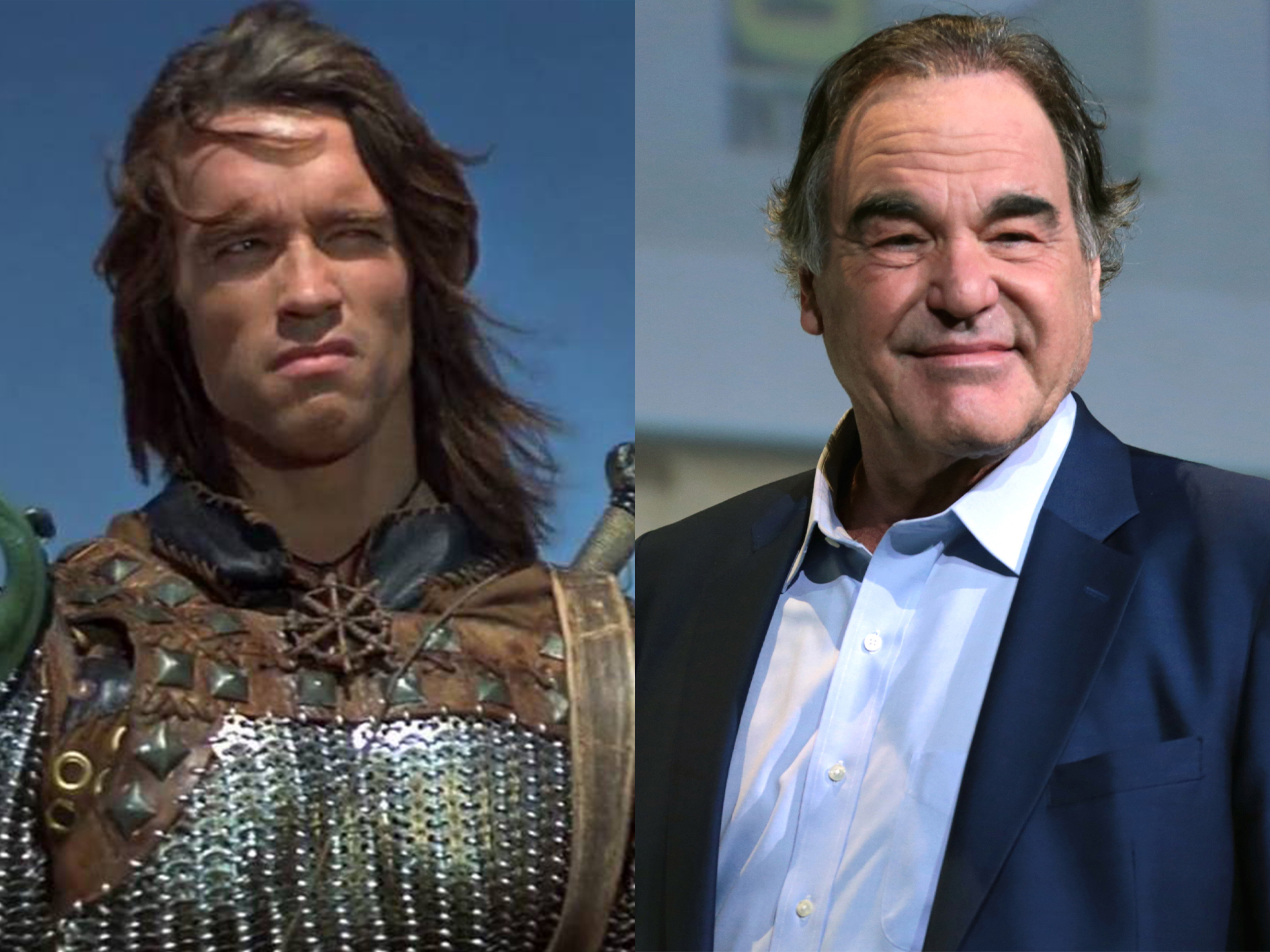 When Oliver Stone was hired to write Conan the Barbarian’s screenplay, his vision was very ambitious and strayed quite far from Robert E. Howard’s original Conan stories. Rather than being set in a mythic past, Stone’s story took place in a post-apocalyptic future, featured armies of mutants and gargantuan demonic monsters, and would have been four hours long.

When John Milius was hired to direct, he also set about rewriting the bulk of Stone’s script to keep the action on a far smaller scale, closer to Howard’s vision and easier to achieve on a limited budget (and with a running time of 129 minutes).

7. Schwarzenegger lost 30 pounds and grew his hair long for the part 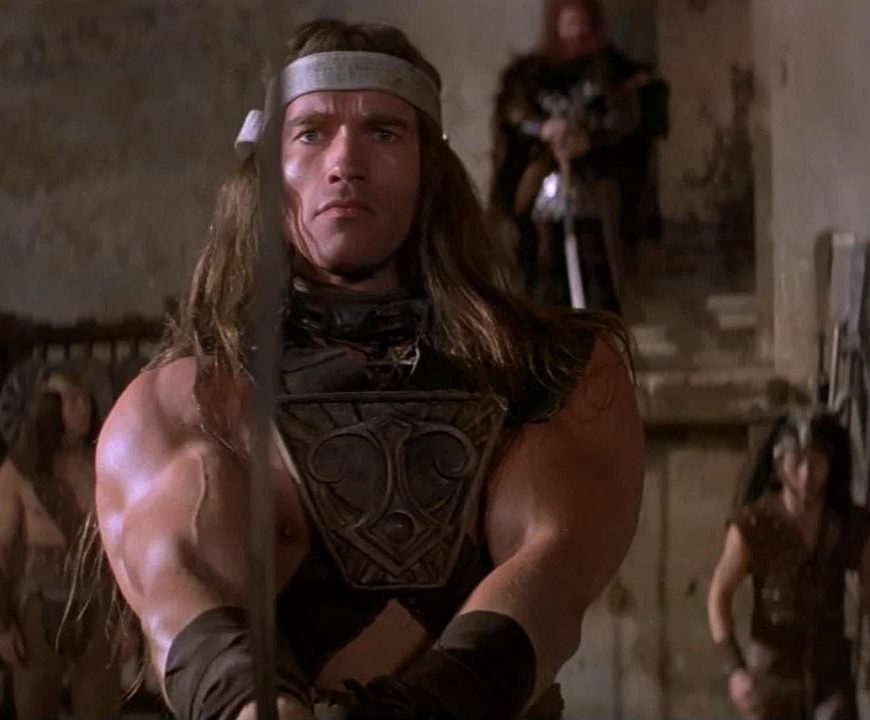 So often when an actor takes on a big action hero role, we hear about them undergoing an intensive training regime to gain muscle. By contrast, Arnold Schwarzenegger was already in such musclebound shape as a bodybuilder, he was instead asked to slim down for Conan the Barbarian. One of the main reasons for this was the sheer size of Schwarzenegger’s arms made it awkward to wield a sword.

Over the course of 18 months, Schwarzenegger reduced his bodyweight from 240 pounds to 210. In addition, he grew his hair long for the role; it’s not a wig, as many viewers may have assumed over the years.

6. The film sparked controversy due to animal cruelty on set 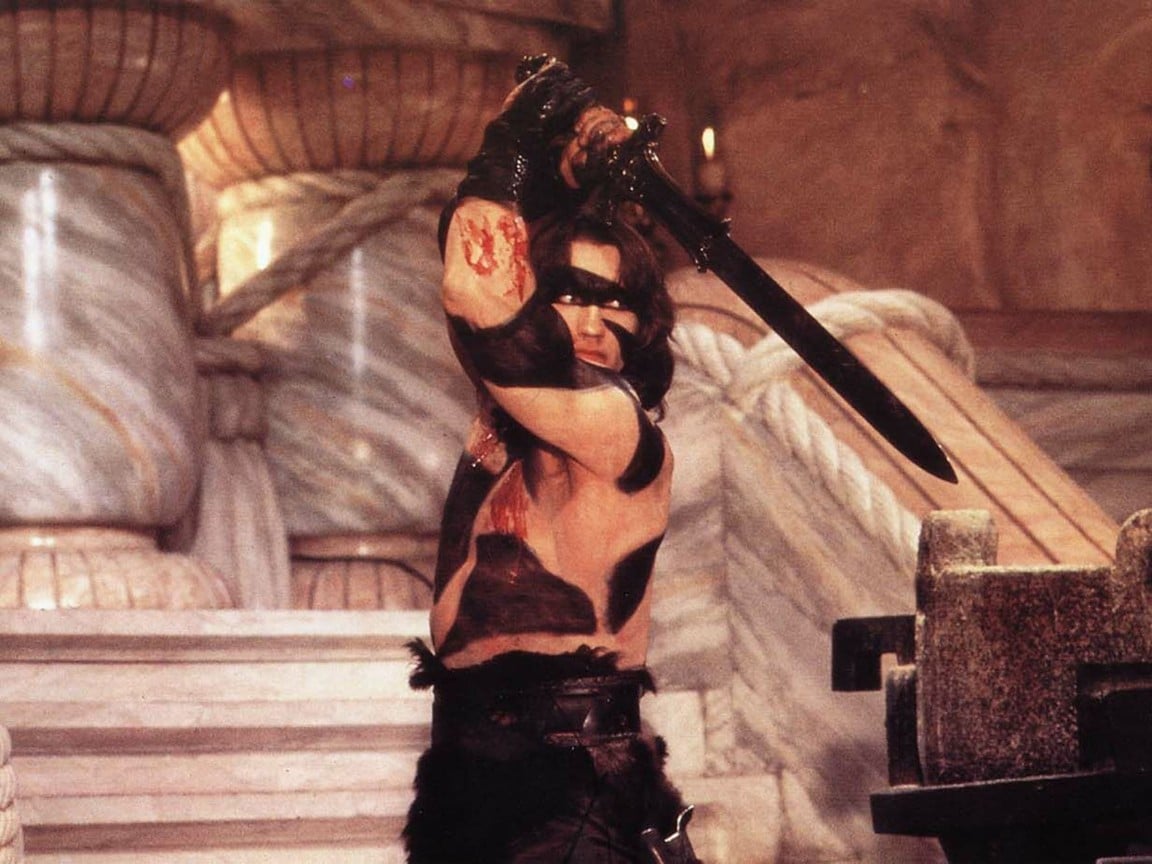 Watch the end credits of Conan the Barbarian, and you’ll see there is no appearance of the familiar credit ‘no animals were harmed in the making of this film.’ This is because Conan the Barbarian was shot primarily in Spain, where laws about the treatment of animals on film sets were extremely lax at the time.

Subsequently the film has proved controversial for scenes in which animals are mistreated, most notoriously when Schwarzenegger’s Conan punches a camel. There are also scenes in which a dog is kicked, and horses are tripped over on wires.

5. Schwarzenegger and Sandahl Bergman did their own stunts because convincing doubles couldn’t be found 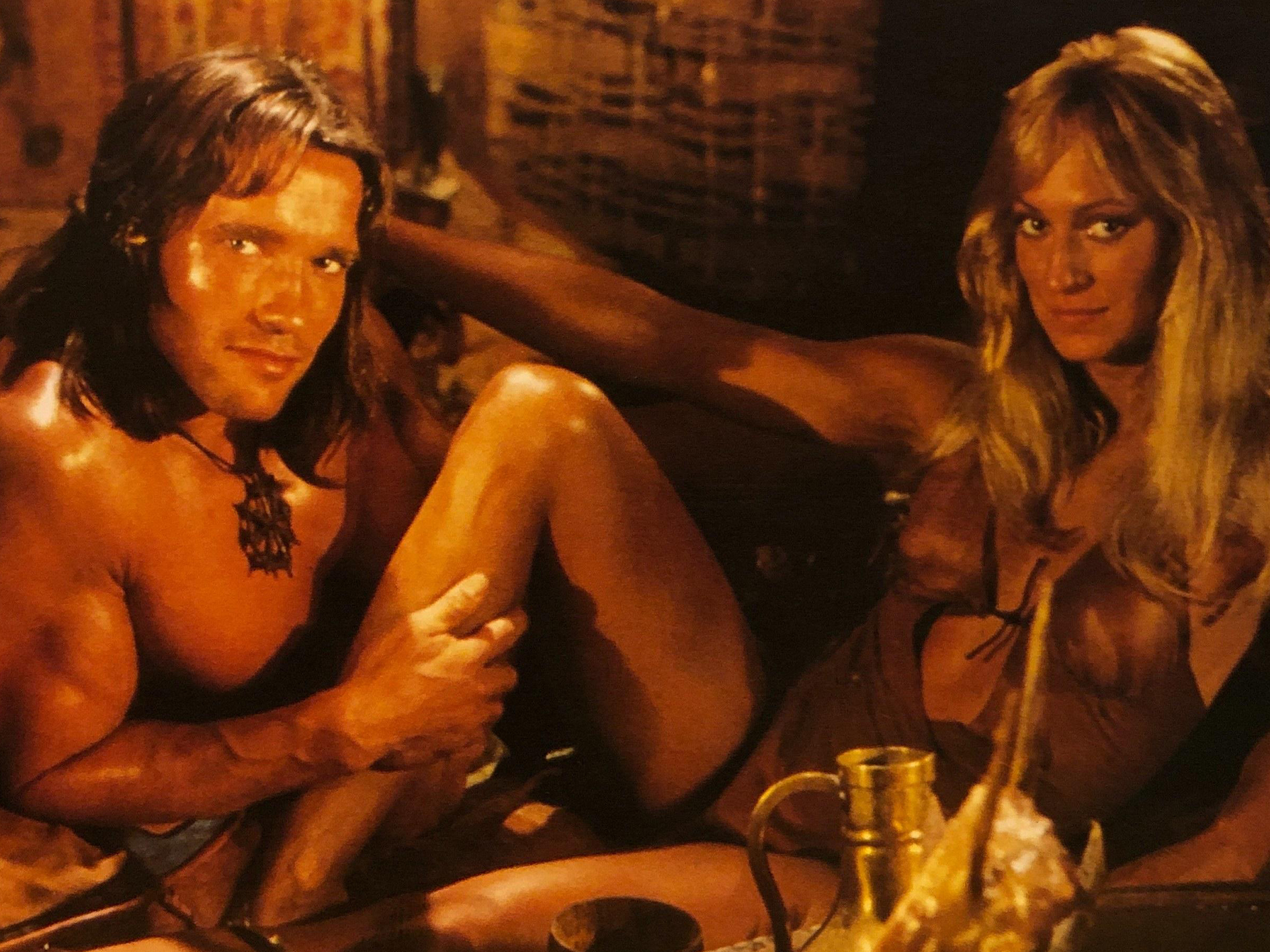 Schwarzenegger was joined in Conan the Barbarian by Sandahl Bergman, an experienced dancer who stood a statuesque six feet tall. While their striking physiques were key to the casting of both actors, this did cause an issue when it came to finding stunt doubles for them.

The filmmakers had no luck finding stunt performers who could convincingly take the place of Schwarzenegger or Bergman, so both actors were obliged to perform their own stunts.

4. Schwarzenegger was originally the film’s narrator, but studio executives were worried about his accent 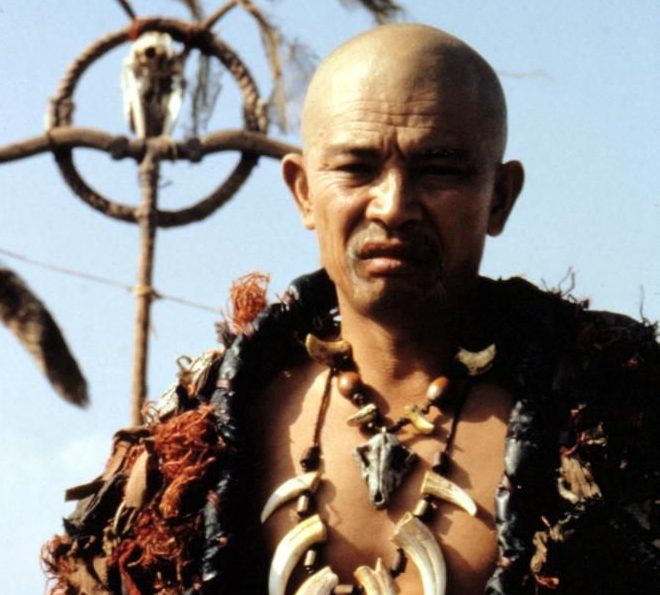 Conan the Barbarian famously features evocative narration throughout. Originally, director John Milius had Schwarzenegger himself deliver this narration, but studio Universal Pictures were worried that the Austrian actor’s thick accent would be illegible to most audiences.

Because of this, the more experienced actor Mako (who co-stars as the Wizard) was given the job of narrator instead, and the lines were rewritten accordingly.

3. Real vultures (including one carcass) were used in the crucifixion scene 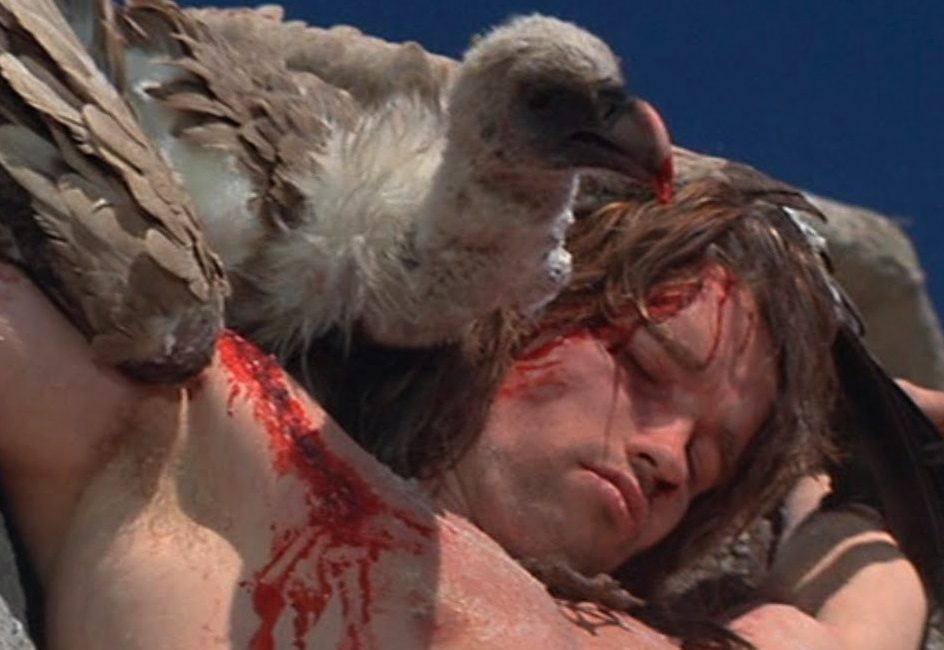 One of Conan the Barbarian’s most memorable scenes sees the titular hero crucified on a tree, at which point a vulture flies down to peck at his head – but the ever-resilient Conan kills the bird by biting it in the neck. As might not be surprising given the lack of concern for animal safety on set, real vultures were used in this scene.

Don’t worry though, Schwarzenegger didn’t literally bite a vulture to death: however, for the biting shot they did place a genuine vulture carcass on his shoulder, which the actor bit for real. After the director called cut, Schwarzenegger had to immediately wash out his mouth.

2. It was intended to start a long-running series 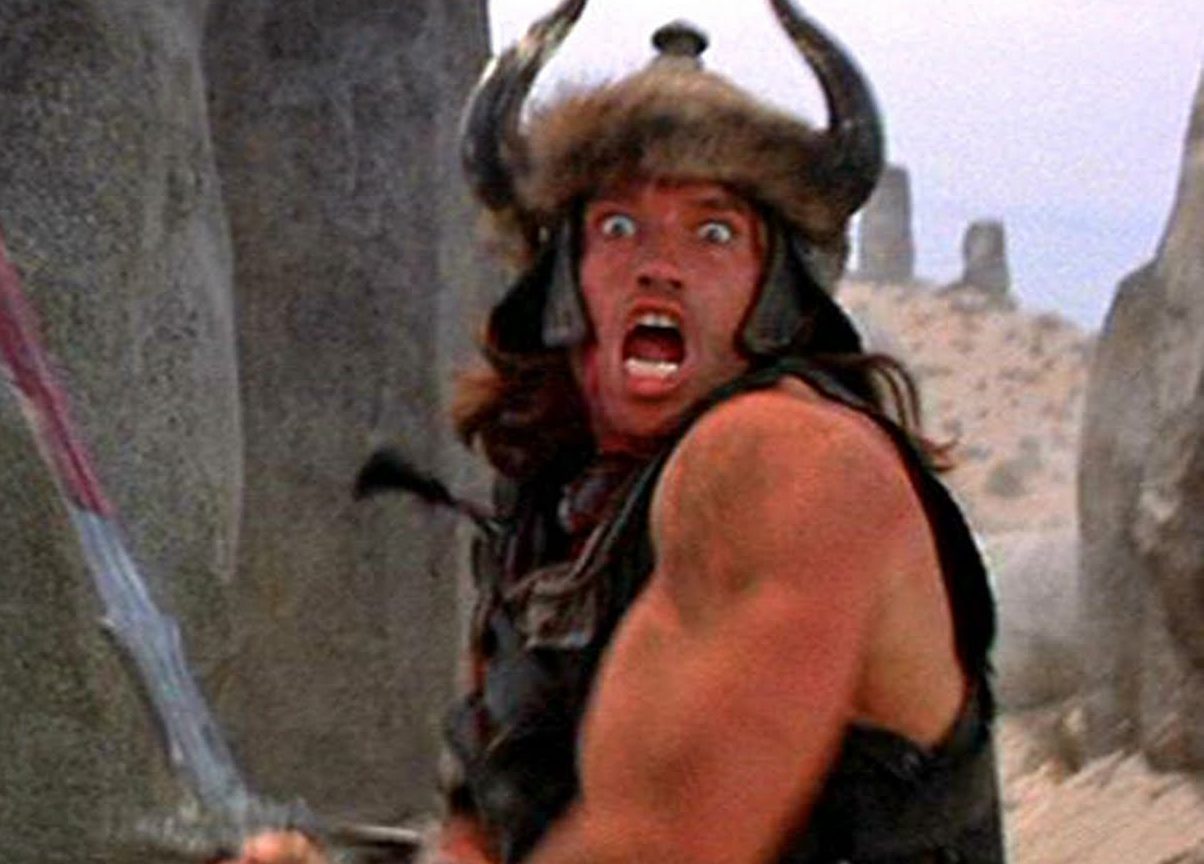 Early on, the plan was for Conan the Barbarian to kickstart a franchise which would spawn many entries in the vein of James Bond, based on the many stories written by Robert E. Howard. However, in the end only one sequel was made, 1984’s Conan the Destroyer, and Schwarzenegger’s dissatisfaction with this film put him off making any more.

Originally, Schwarzenegger was intended to play Conan a third time in 1985’s Red Sonja (also based on a Robert E. Howard creation), but a rights issue meant the character had to be rewritten as an original hero named Kalidor.

1. A third Conan movie was almost made by the Wachowskis 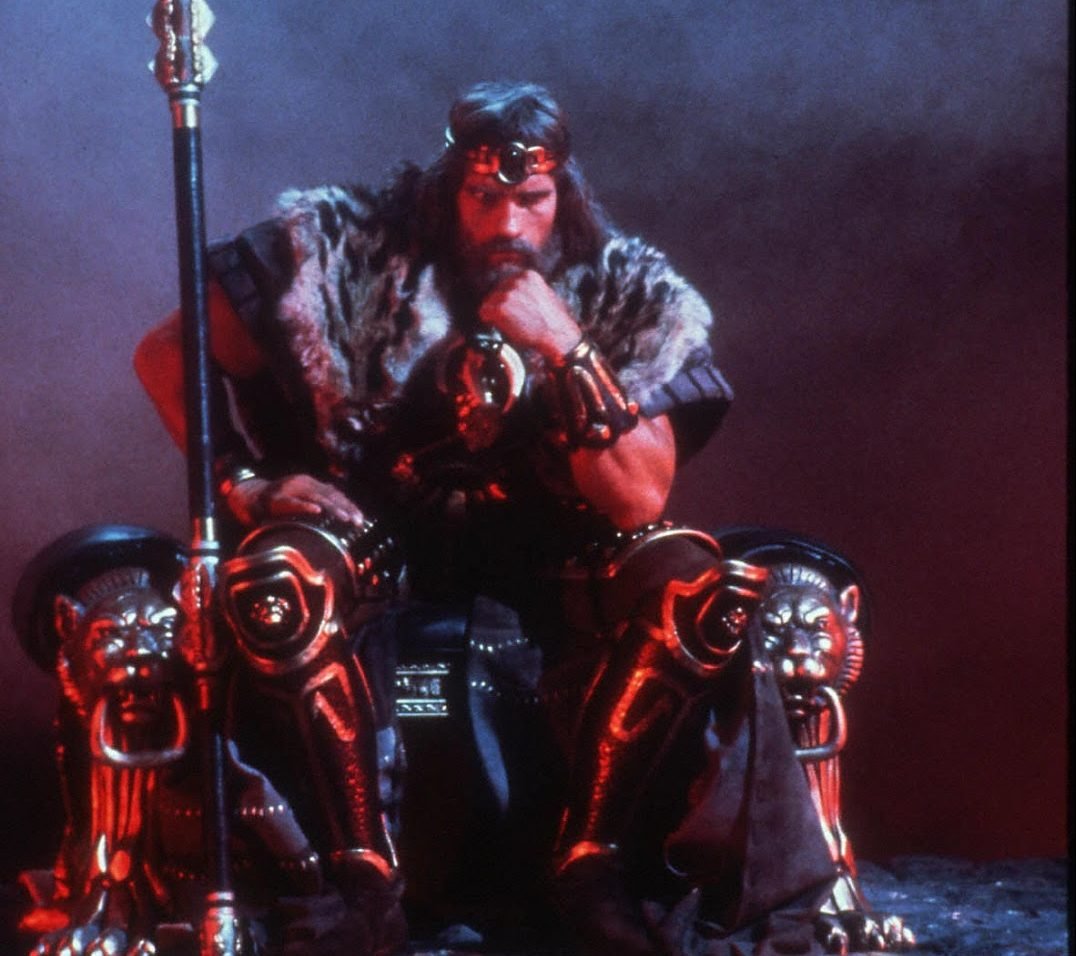 In the wake of The Matrix, writer-director siblings Lana and Lily Wachowski were attached to a proposed third Conan movie entitled King Conan: Crown of Iron, which would have cast the then-age appropriate Schwarzenegger as the aged Conan, as teased at the climax of Conan the Barbarian. Dwayne Johnson and Vin Diesel were rumoured to be contenders to play Conan’s son.

Sadly, the Wachowskis’ commitment to the two Matrix sequels meant the project wound up falling through the cracks, and the project has languished in development hell ever since.