10 Famous Actors Who Appeared In Tales Of The Unexpected

Tales of the Unexpected was a British TV series which presented its audience with some very creepy (and often completely bizarre) storylines. Each episode was self-contained, and most of the tales featured in the programme were directly inspired by Roald Dahl’s collection of spooky short stories.

The series also managed to attract a number of high-profile guest stars, and in the list below we’ve assembled ten famous faces who made appearances in the show that you might not have remembered… 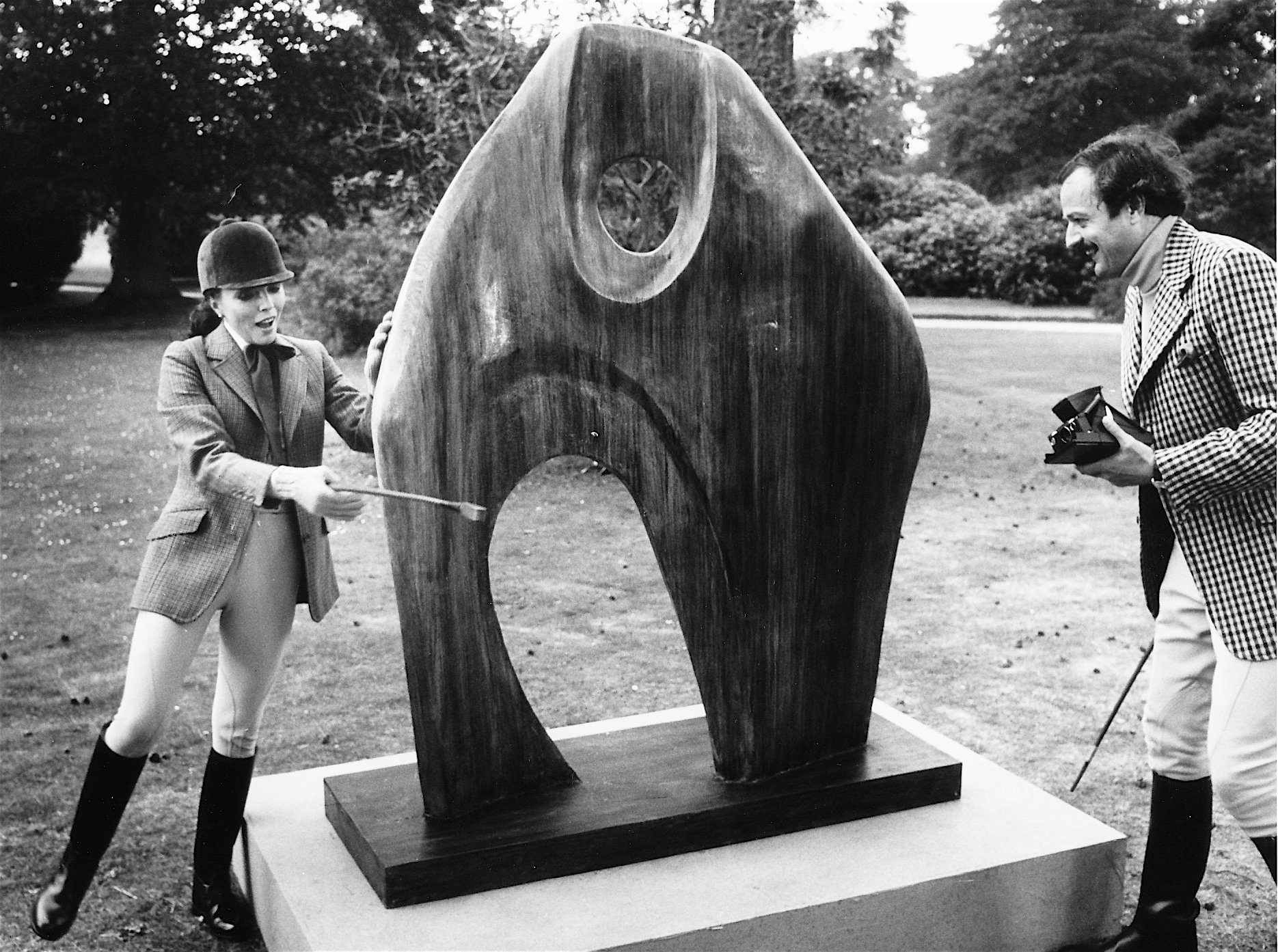 Veteran actress Joan Collins had already starred in several films by the time she made her guest appearance on Tales of the Unexpected. However, her acting career had recently taken a downturn thanks to a string of badly-received horror movies in the 70s.

Collins starred in the episode ‘Neck’, which first aired on 28th April 1979, only two years before she landed her acclaimed role in Dynasty. She played Lady Turton, an aristocrat who ends up having a series of affairs behind her husband’s back – much to the annoyance of Lord Turton and his faithful butler Jelks.

As the episode title suggests, Collins ends up getting into a spot of bother when she accidentally gets her head stuck in one of her husband’s famous artworks whilst getting it on with another man. In typical Tales of the Unexpected fashion, viewers are left guessing as to whether Lord Turton actually cuts off his wife’s head or not… 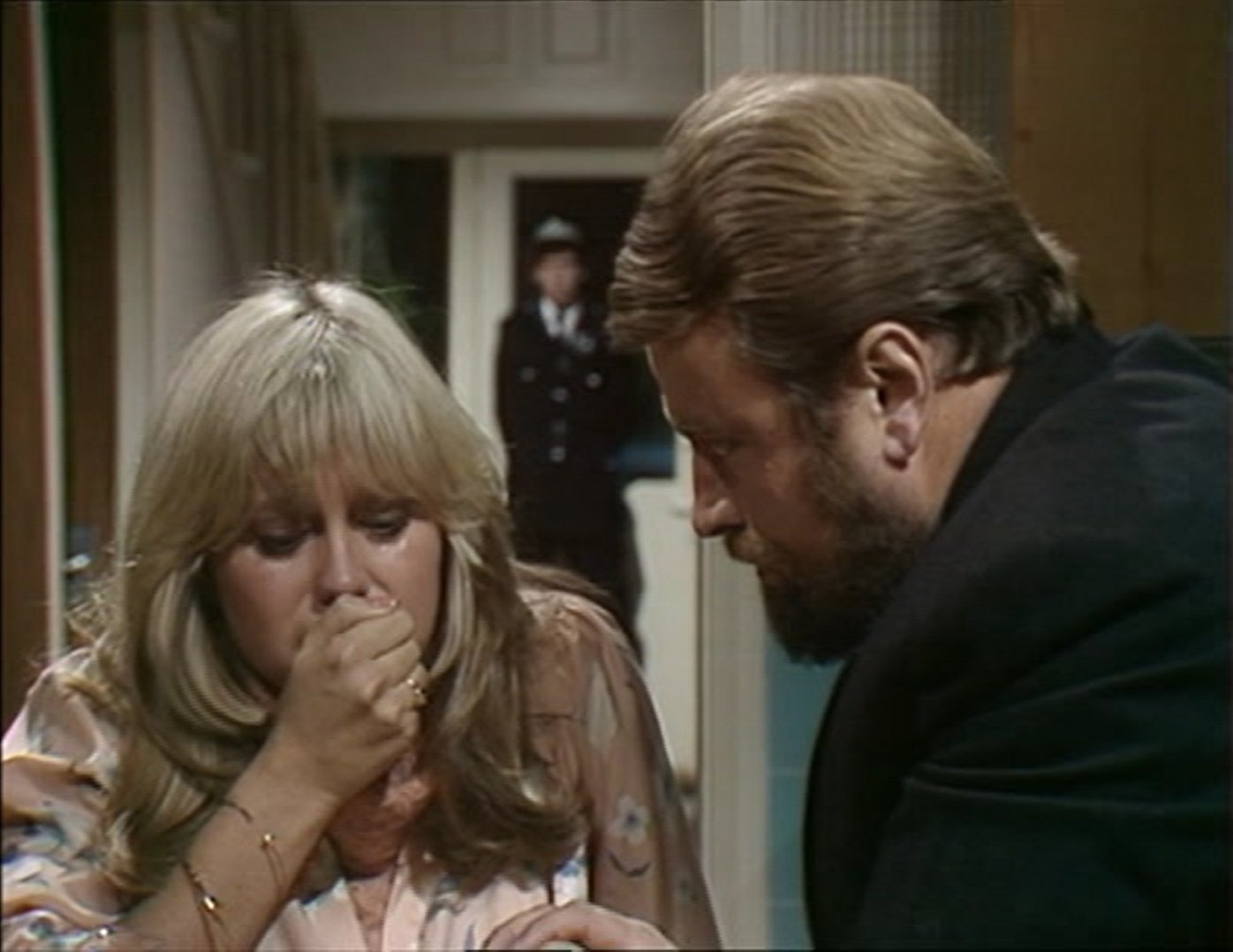 Brian Blessed was a well-established television and stage actor in the 1970s, but that didn’t stop him from making a guest appearance on Tales of the Unexpected as Detective Sergeant Jack Nolan.

The legendary actor appeared in the eerily-titled ‘Lamb to the Slaughter’ in 1979, a well-known yarn involving a leg of lamb as an effective murder weapon. Pregnant housewife Mary Marney kills her husband with a swift blow to the head after he comes home and tells her that he’s leaving her.

The police are baffled when they fail to find a murder weapon, but in a creepy twist the men actually end up eating it after Mary persuades them to stay for a roast (lamb) dinner. 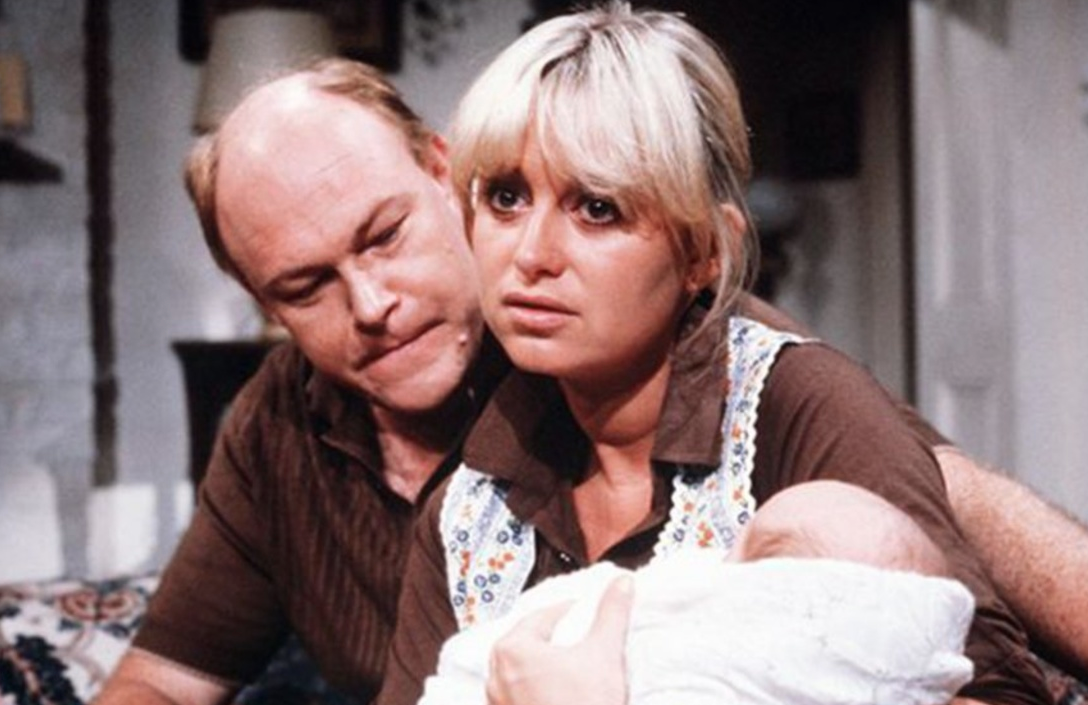 Actor Timothy West is best known for his roles in television and theatre. He has appeared in both Coronation Street and EastEnders in recurring roles and is married to Prunella Scales – the pair have appeared on the travel program Great Canal Journeys together.

West appeared in a particularly creepy episode of Tales of the Unexpected in March 1980 entitled ‘Royal Jelly’. He played the role of a beekeeper named Albert Taylor who weirdly decides to start feeding his sick baby royal jelly, which is normally used to make bee larvae grow.

His wife is understandably a bit concerned when her husband ends up drinking the stuff himself and turns into a giant bee, whilst their second child resembles a grub rather than a human baby. 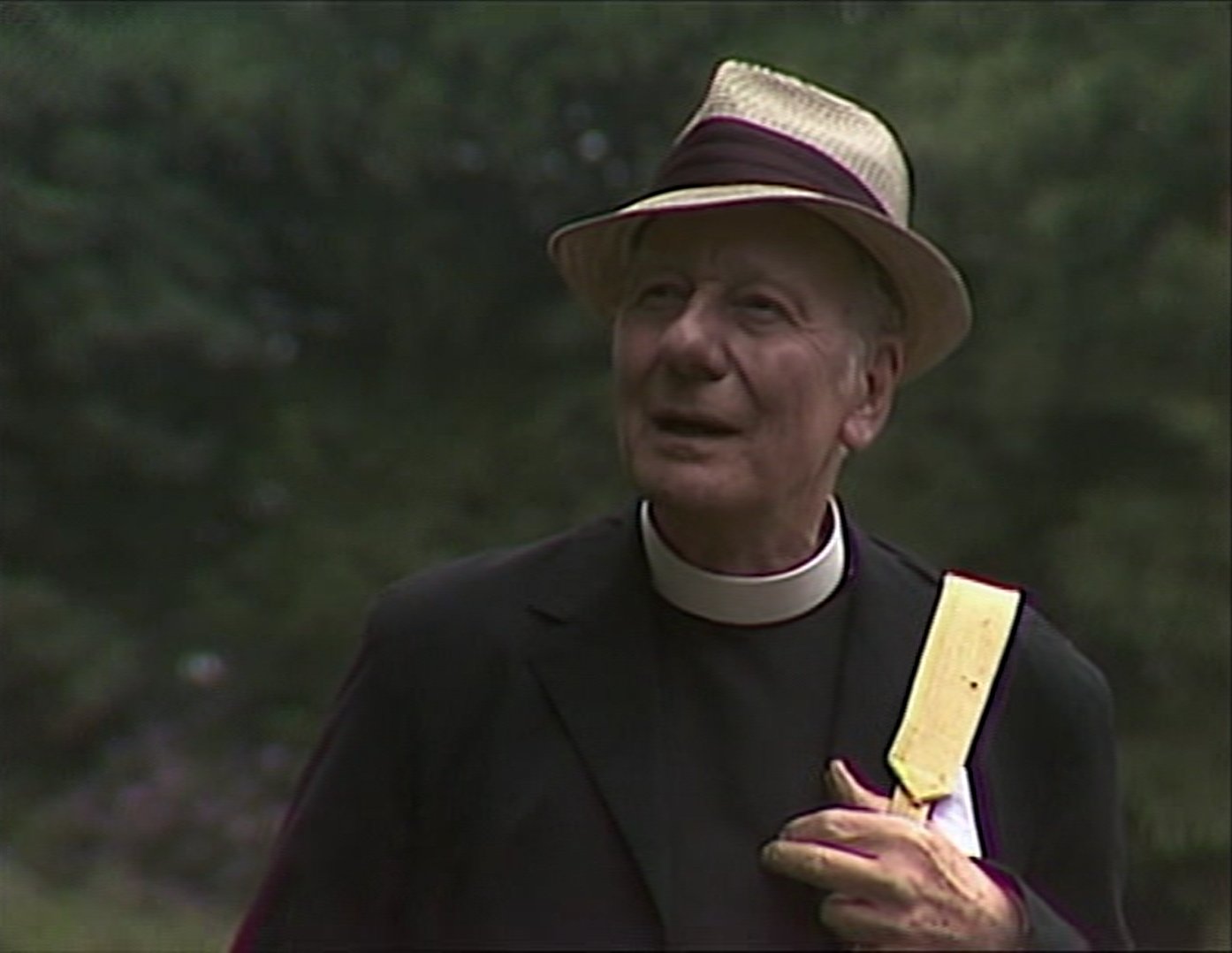 John Gielgud died in the year 2000 after an acting career spanning eight decades!

He has the rare distinction of having won an Oscar, Emmy, Grammy and a Tony award – but he put aside any airs and graces to star in an episode of Tales of the Unexpected in 1979. He appeared in the episode Parson’s Pleasure, in which his character dresses as a vicar but is actually a no-good antiques thief.

Gielgud went on to star in The Elephant Man not long after recording his guest appearance on the programme, and made over twenty films in the 80s alone. 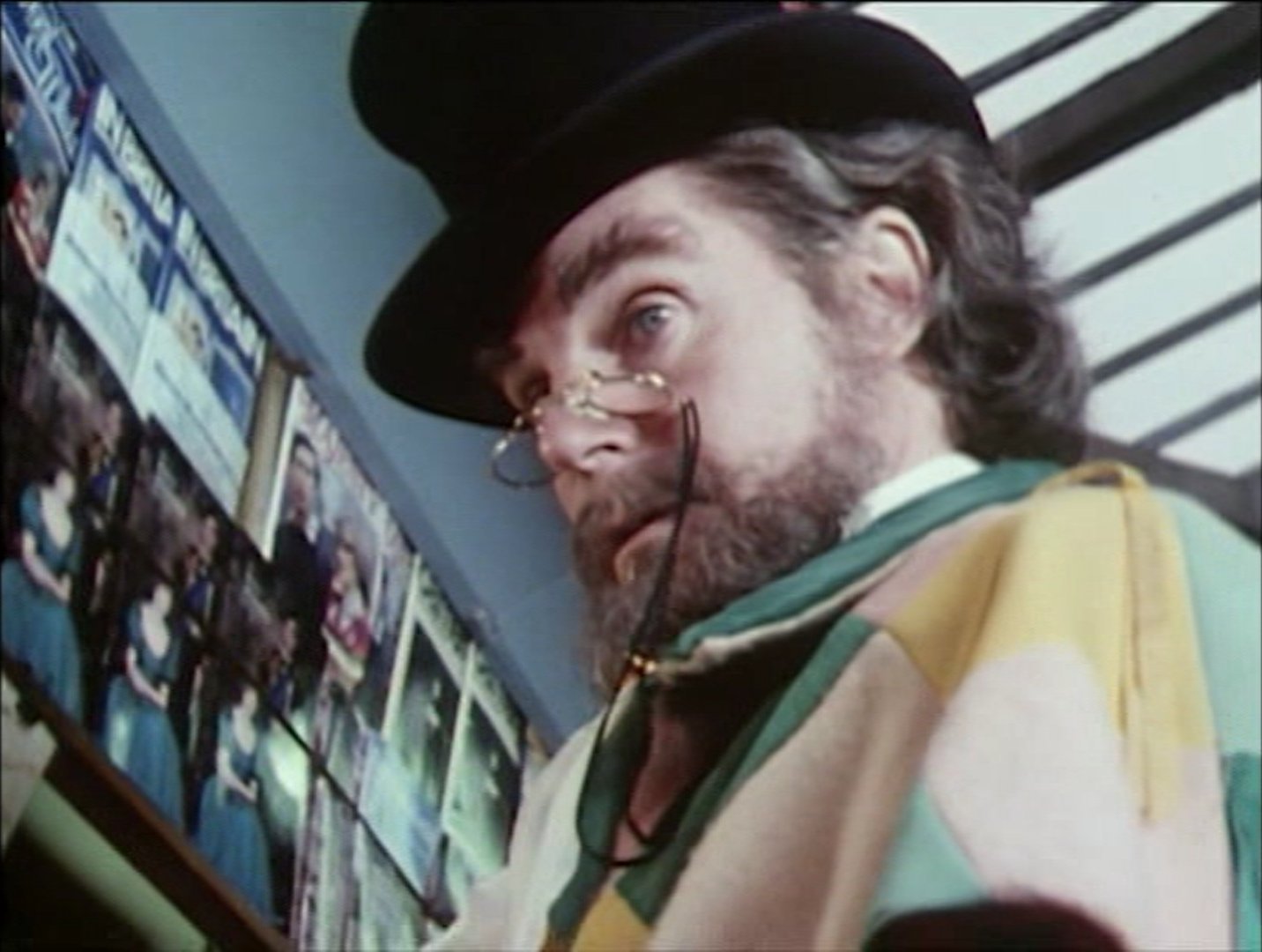 Derek Jacobi is a legendary stage actor who most people will know for his memorable performances in films such as Day of the Jackal, Gosford Park and The King’s Speech. In Tales of the Unexpected, he portrayed an oddball called Drioli.

Drioli was a character in the episode ‘Skin’, which first aired on 8th March 1980. He was an ex-tattoo artist and street beggar with a very famous artwork on his back, which soon attracts the attention of several wealthy art dealers. One offers to house Drioli in a luxury hotel for the rest of his days, as long as he promises to show off his back to guests whenever they ask him to.

Drioli takes him up on the offer, and the pair march off into the distance. The narrator only reveals to us afterwards that the hotel doesn’t exist, and a large piece of skin with the artwork on Drioli’s back ends up appearing at an auction house in Argentina not long after he disappears… 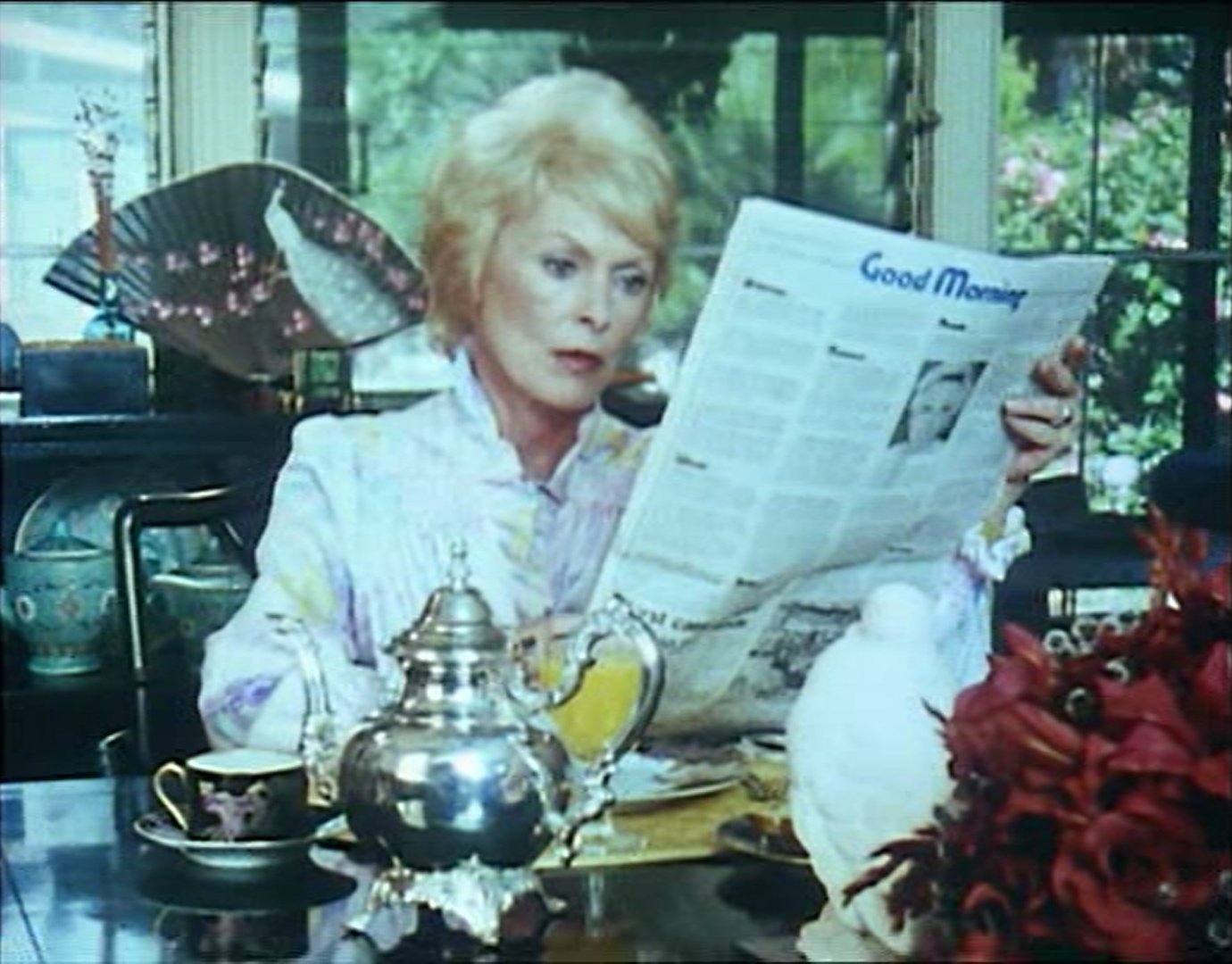 American actress Janet Leigh never quite managed to shake off her iconic role in Alfred Hitchcock’s Psycho, for which she received an Academy Award nomination for Best Supporting Actress. Despite scaling back her career, she did make an appearance in Roald Dahl’s creepy television series.

Leigh played the role of a concerned wife in an episode of the series named ‘Light Fingers’ which first aired in 1982. Although she only played a supporting role it’s quite a big guest star for the series to have bagged!

The appearance was not long before Leigh returned to the big screen with her memorable performance in Boardwalk, a film about New York gangs. 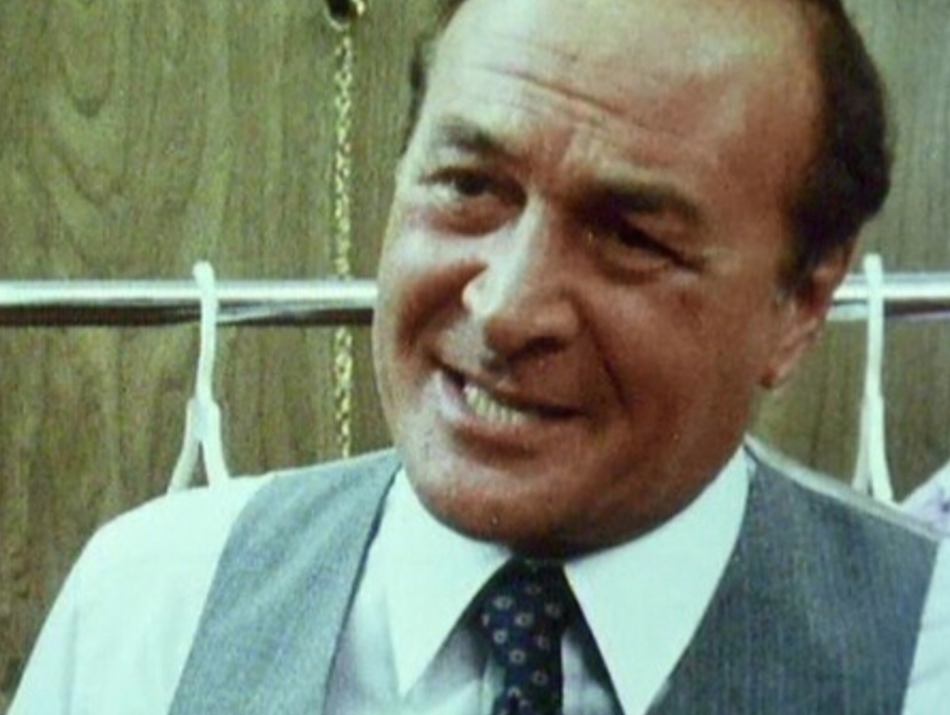 Robert Loggia is another big-name American actor who made his way onto the small screen in Tales of the Unexpected.

In the episode, Harry was a clothing manufacturer in Wilmington, Delaware. However, trouble ensues when the business is about to go bust and Harry thinks it might be a good idea to bump off his partner and nab the insurance money…

At this point in time, Loggia would have been fresh from his memorable appearance in the Brian de Palma gangster hit Scarface (1983) opposite Al Pacino. The year after his appearance in Tales of the Unexpected, he went on to star in Prizzi’s Honour alongside Jack Nicholson and Kathleen Turner. 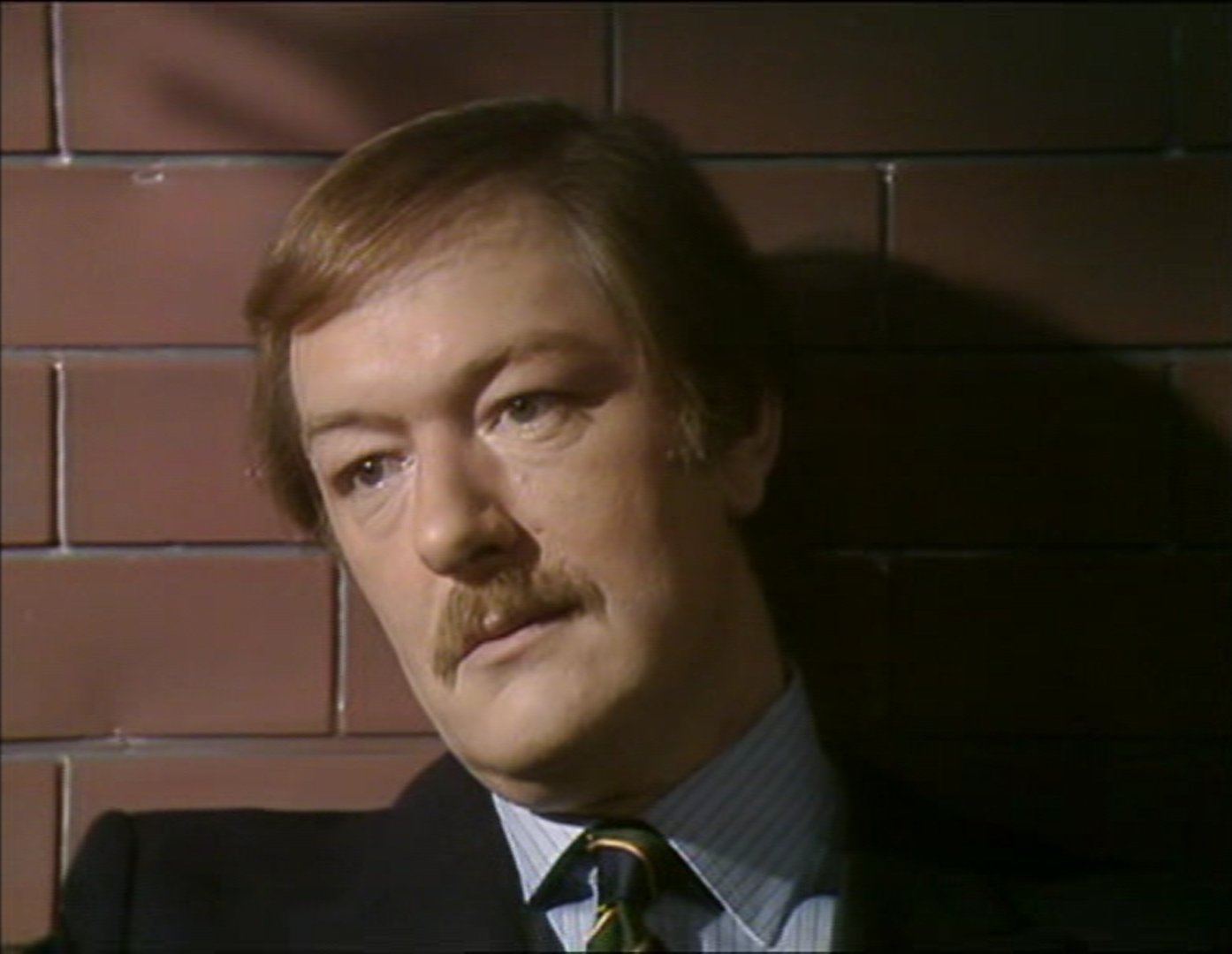 Michael Gambon is an actor who requires very little introduction. However, the vast majority of TV viewers in the early 80s probably wouldn’t have known who he was when he made a guest appearance on Tales of the Unexpected.

He only really achieved household name status when he appeared in The Singing Detective in 1986, despite having begun his TV and stage career much earlier. In Tales of the Unexpected, he played the role of Andrew in an episode entitled ‘The Umbrella Man’. 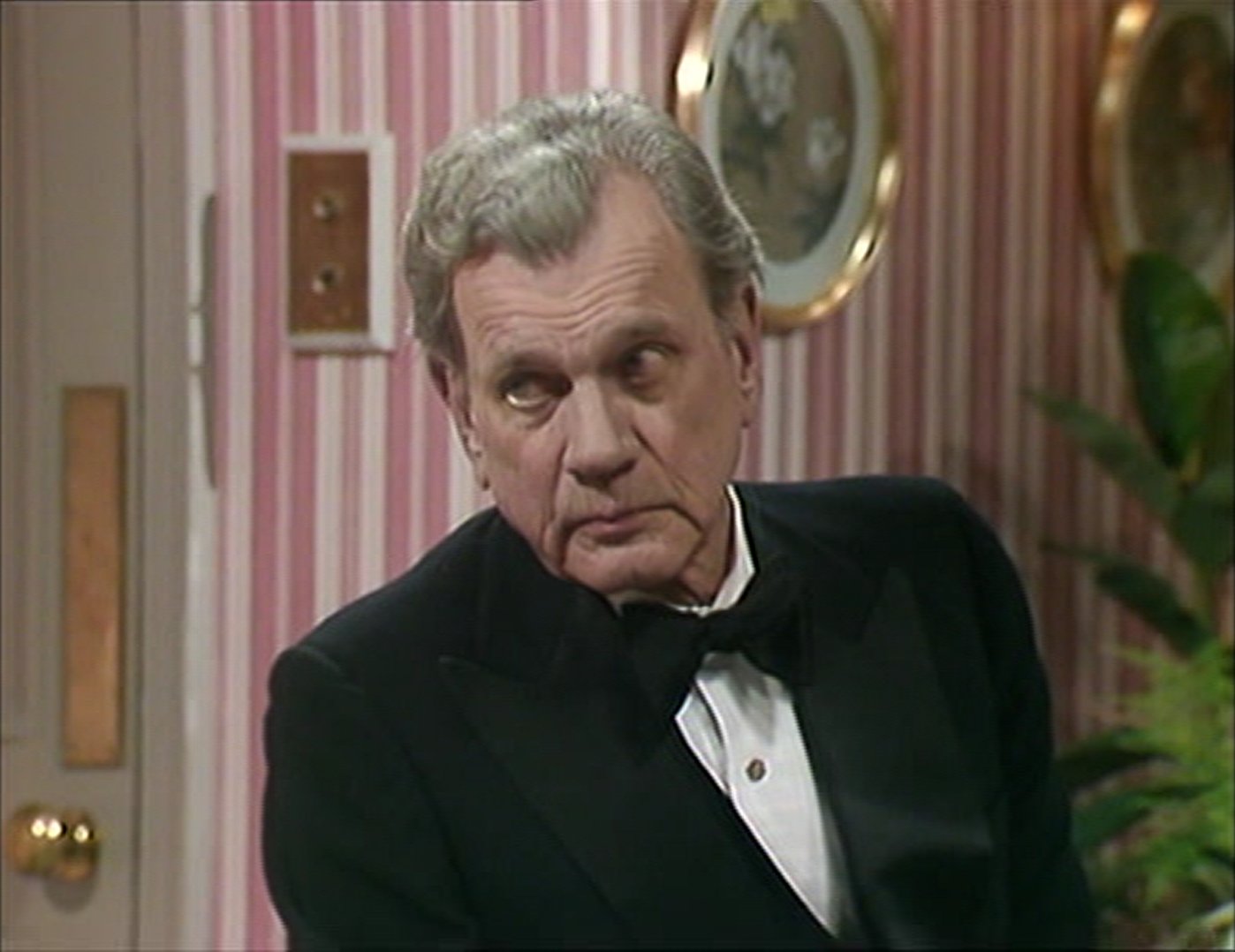 Most people will recognise Joseph Cotten for his role in the iconic film The Third Man, in which he played the writer Holly Martins, close friend of Orson Welles’ Harry Lime. Somehow he made the leap from classic film noir to Tales of the Unexpected, turning up on the British small screen in 1979!

Cotton guest-starred in an episode entitled ‘Depart in Peace,’ playing a wealthy bachelor whose proclivity for elaborate revenge ends with a largely nude portrait and some suspicious caviar.

You’ll have to watch it yourself to figure it out! 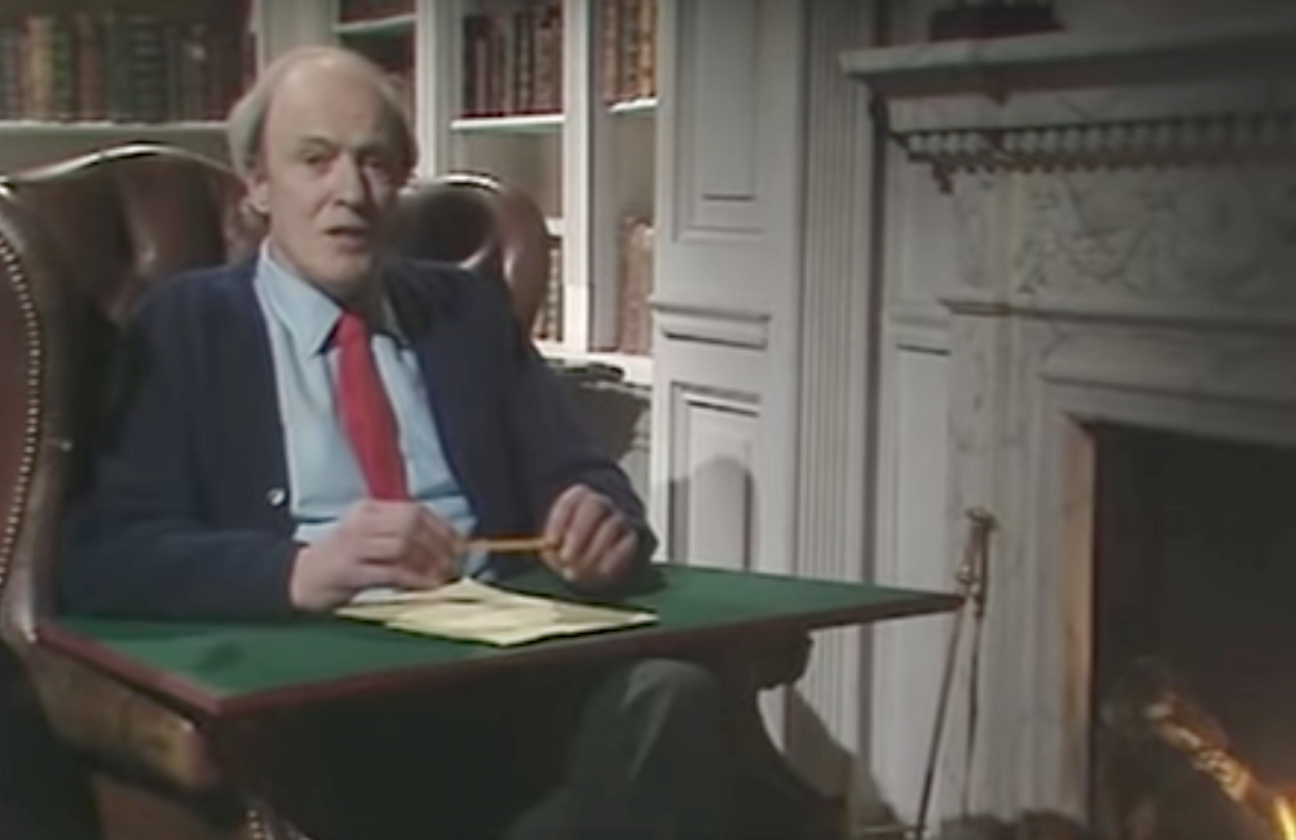 OK, so he’s not technically an actor, but he did make an appearance in plenty of episodes of Tales of the Unexpected. The author could often be found sat by a fireplace at the start of each programme, introducing yet another one of his sinister short stories to the audience at home.

The first two seasons and one episode of the third season were all directly inspired by Dahl’s collection of short stories, which first appeared in 1979 in various magazines and literary publications.

After appearing in the popular TV series, Dahl tragically died ten years later in 1990 of a rare type of blood cancer. His adult short stories and children’s books continue to be enjoyed by readers the world over.